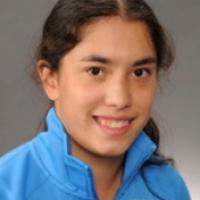 When and where did you begin this sport?
She started shooting with her father and sisters after her dad setup an air rifle range in the family's basement.
Why this sport?
She learned to shoot from her dad and her sisters Abby [US national team] and Sandy [2008 US Olympic team].
Name of coach
Yuman Fong [father], Bob Foth [national]

Hobbies
Playing trumpet, volleyball, swimming, track and field. She is also a self-confessed 'chocaholic' [chocolate addict]. (usparalympics.org, 01 Dec 2008)
Injuries
When she was young, she had to 'overcome a re-implanted trigger finger after an accident'. (usashooting.com, 01 Dec 2010)
Sporting philosophy / motto
"Practice hard; set realistic but high goals; be brave." (usashooting.com, 01 Dec 2010)
Other sports
Her older sisters Abigail and Sandra have both competed in shooting at national and international level. (usparalympics.org, 01 Dec 2008)
Impairment
She was born at 24 weeks weighing only one pound, eight ounces, and was diagnosed with cerebral palsy. She underwent 11 operations and was subsequently discharged three months later. (usparalympics.org, 01 Dec 2008)
Other information
INSPIRATIONAL MEETING
In 2000 when she was just ten, American swimmer Dara Torres came to speak to her, her sisters, and other children at a sports camp. Torres had just broken the American record for 50m swimming, and had planned to show her gold medal to the children. "My heart melted around [the Fong sisters], so I just went ahead and gave it to them," Torres said. "I remember Danielle in particular, she just had such a sweet face." Danielle hung the medal on her wall, and said it was a source of inspiration for her long after she gave up swimming to focus on shooting. (nytimes.com, 08 Aug 2008)

SPORTING FAMILY
Their father, Dr. Yuman Fong [a surgeon who emigrated from Hong Kong], encouraged all his daughters to pursue sports from a young age. He started his daughters in swimming, but soon realised their lack of height would prevent elite level success, so they switched to shooting as Yuman had some experience in sports shooting from his high school days. He setup an air rifle range in the family basement, and their talent grew from there. "It turned out he was a good teacher, and they were good students," said their mother, Nicole. Both Abigail and Sandra made the US shooting team in 2007, with Sandra just edging out her sister to secure a spot on the team for the 2008 Beijing Olympic Games. All three sisters say they are lucky to be able to train alongside world class shooters [referring to each other] every day. (nytimes.com, 08 Aug 2008)