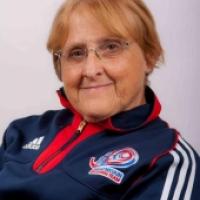 Why this sport?
She enjoys the sport because she only has to rely on herself.
Name of coach
Pasan Kularatne [national]

Nicknames
Doris, Dimbe, Di (channel4.com, 2012; disabledshooting.org.uk, 2012)
Memorable sporting achievement
Attending the opening ceremony of the 1988 Paralympic Games in Seoul. (NPC, 27 Aug 2012)
Hero / Idol
British multi-sport Paralympian Isabel Newstead. (worcestershirepartnership.org.uk, 24 Aug 2008)
Awards and honours
She was named a Member of the Most Excellent Order of the British Empire [MBE] in 1996. (NPC, 27 Aug 2012)
Other information
PARALYMPIC VETERAN
She made her Paralympic Games debut at the 1984 Games, and went on to appear at eight consecutive editions of the event until the 2012 Games in London. (SportsDeskOnline, 17 Nov 2015; channel4.com, 2012)