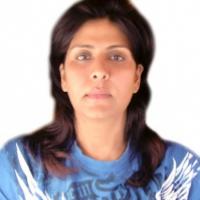 When and where did you begin this sport?
She practised Para swimming before switching to Para athletics in 2009.
Why this sport?
The sport motivated her to overcome her impairment and break negative stereotypes she felt surrounded her age and gender in India. "I shut down my restaurant business near Ahmednagar [India] in Maharashtra [state] to shift to Delhi to pursue sport."

Hero / Idol
Indian boxer Mary Kom. (vervemagazine.in, 03 Jun 2017; Athlete, 23 Oct 2015))
Sporting philosophy / motto
"Sport goes beyond competition. It's more about a means to fitness, self-esteem and a healthy identity in spite of disability." (Athlete, 23 Oct 2015)
Awards and honours
In 2019 she was recipient of the Rajiv Gandhi Khel Ratna Award in India. (thelogicalindian.com, 30 Aug 2019)

In 2019 she was recipient of the International Women's Day Recognition by the International Paralympic Committee [IPC]. The honour is distributed to someone who embodies the spirit of the Paralympic movement and serves as a role model for all women. (paralympic.org, 08 Mar 2019)

She was named 2018 Para Athlete of the Year at the Sportstar Aces Awards ceremony in India. (Twitter profile, 16 Feb 2019)

She received the Arjuna Award at the 2012 National Sports Awards. (defenceinfo.com, 15 Sep 2012; deepamalik.com, 10 Sep 2015)
Other sports
She has won national and international medals in Para swimming. In 2012 she was given the Arjuna Award for her performance in swimming. (bigwire.in, 13 Sep 2016; indianexpress.com, 06 Jul 2010)
Milestones
In 2016 she became India's first female Paralympic medallist when she won silver in the F53 shot put at the 2016 Paralympic Games in Rio de Janeiro. (myinfo.rio2016.com, 13 Sep 2016; paralympic.org, 02 Oct 2018)
Famous relatives
Her daughter Devika competed internationally as a sprint runner in Para athletics. (paralympic.org, 08 Feb 2019)
Ambitions
To win a gold medal at the 2020 Paralympic Games in Tokyo. (vervemagazine.in, 03 Jun 2017)
Impairment
She had a tumour successfully removed from her spine at age six but in 1999, doctors discovered the cancer had returned and that she would require three spinal operations. She had been warned that she may not be able to walk again, and this proved to be true as she woke up paralysed from the waist down. Following surgery, she had a total of 183 stitches between her shoulder blades. "It took long time to adjust to my body and its problems. I had to spend almost two years learning how to sit and walk. I hate sympathy, and I didn't want people think me of a weak and helpless person." (jagran.com, 05 Feb 2013; indianexpress.com, 30 Aug 2012; indianexpress.com, 06 Jul 2010)
Other information
RETIREMENT AND NEW ROLE
In September 2019 she retired from competitive in order to run for the presidency of the Paralympic Committee of India [PCI], a post she was elected to in January 2020. "I have no regrets at all. I have been a rebel all my life and did what I wanted. I am happy with what I have achieved. I gave my country 23 international medals. I am happy. Sports for me was a tool to create awareness that you can do whatever you want, and the physical disabilities don't mean anything. I did my best, broke records in whatever I did and took India to greater heights. Now I want to do that as an administrator." (paralympic.org, 11 May 2020; indianexpress.com, 11 May 2020)

FAMILY BOND
Mother of two, she created a special bond with her elder daughter Devika, who also developed an impairment at an early age. When Deepa was again diagnosed with tumours, which ended up in the surgery that left her paralysed from the waist down, Devika began presenting the symptoms of hemiplegia that limited the movements on her left side. “Just as I was getting used to bringing up Devika with her challenges, I was myself bedridden. I was learning my new body. Somewhere I felt maybe destiny got me to this, to be a role model for my child to exercise.” Years later Devika even represented India in international Para athletics competitions. “In our house, whenever there's cooking, it's family time. If it's bathing time, I can wash Devika's hair. It's given a reason to bond all the time. Certain activities that other families may have never thought of [give us] a better life. I think both of my children have grown up to be more compassionate, positive, open, and they are better human beings. They're thinking beyond normal.” (paralympic.org, 08 Feb 2019)

OTHER ACTIVITIES
She helps her daughter Devika at her foundation, Wheeling Happiness Foundation, which aims to help people with impairments live empowered and barrier-free lives, providing medical equipment and financial support. “Just because we treated it right, with happiness and positivity, disability has given us an abundance in return. I'm so happy that I could pass it on, that it's all right to be different. We are all different, but [it's] what we make of ourselves.” (paralympic.org, 08 Feb 2019, 08 Mar 2019; kreedon.com, 05 Oct 2018)