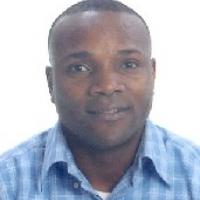 When and where did you begin this sport?
He began the sport at age 15 in Zaria, Nigeria.
Why this sport?
"When I was in school I had to push myself to play sports. I tried tennis, high jump and basketball, but I walked with a big limp making it difficult. At the time, the only sports available for people with disabilities [in Nigeria] were shot put, javelin, powerlifting and track. I couldn't participate in track because I couldn't afford a better wheelchair, so I found heavy spare rods at auto shops and began to practise throwing."

Nicknames
Thermocool [after a Nigerian home appliance brand]. (Athlete, 03 Dec 2010)
Most influential person in career
His family, friend Masai Uriji. (Athlete, 03 Dec 2010)
Hero / Idol
His father Adolphus Adeyi Ogbe. (Athlete, 03 Dec 2010)
Injuries
In 2010 he threw a discus personal best despite competing with two boils under his right arm. (Athlete, 03 Dec 2010)
Sporting philosophy / motto
"Success is measured not so much by the position that one has reached in life, as by the obstacles which he has overcome while trying to succeed." [US author Booker T. Washington] (Facebook page, 26 Sep 2015)
Awards and honours
He received the 2013 Mosaic Award in United States of America, given to immigrants and refugees who have made a significant contribution in their profession and to the community. (dennisogbe.com, 02 Jan 2014)

In 2005 he received the Outstanding Adult Learners Award from Kentuckiana Metroversity, a consortium of higher education institutions in Louisville, KY, United States of America. (Athlete, 03 Dec 2010)
Other sports
He has played in the National Wheelchair Basketball Association [NWBA] in United States of America. (Athlete, 03 Dec 2010)
Impairment
He contracted malaria at age three. While receiving treatment a nurse broke a needle in his back and he was left in a coma for three days. This led to him having a weakened immune system, and he subsequently contracted polio that resulted in paraplegia. He regained movement and strength in his right leg. (dennisogbe.com, Aug 2012)
Other information
NIGERIA TO UNITED STATES OF AMERICA
He competed for Nigeria at the 2000 Paralympic Games in Sydney, where he met an assistant track and field coach for United States of America. Ogbe was offered a partial sports scholarship for Bellarmine University in Louisville, KY, United States of America. He became a US citizen in 2010. (rotary.org, 14 Apr 2014; teamusa.org, 28 Aug 2012)

OTHER ACTIVITIES
He has served as an ambassador for the United Nations Foundation Shot@Life campaign, a project aiming to provide vaccines to children in developing countries. (thesomervillenewsweekly.wordpress.com, 19 Dec 2016)