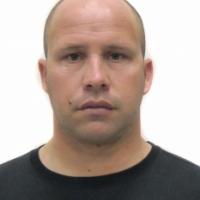 When and where did you begin this sport?
He took up Para swimming in 2005.
Why this sport?
He began swimming regularly as part of his physical therapy following his motocross accident. "Sport was my life, and at age 21 I could not just give up everything. I tried playing wheelchair basketball, but then I was advised by doctors to move in the water for therapeutic purposes. In the water I was better both physically and psychologically. I started swimming and winning some races. From that moment on I never stopped."
Club / Team
Canottieri Baldesio [ITA] / GS Fiamme Oro [ITA]:
Name of coach
Riccardo Vernole [national], ITA

Hobbies
Motocross. (Athlete, 09 Sep 2019)
Memorable sporting achievement
Winning two gold medals at the 2017 World Championships in Mexico City, Mexico, and a bronze medal in the SB3 50m breaststroke at the 2016 Paralympic Games in Rio de Janeiro. (Athlete, 09 Sep 2019)
Most influential person in career
Coach Maurizio Bregoli. (Athlete, 09 Sep 2019)
Hero / Idol
Italian motocross rider Antonio Cairoli. (Athlete, 09 Sep 2019)
Injuries
He took a break from the sport after competing at the 2014 European Championships in Eindhoven, Netherlands, due to a persistent neck issue. He returned to national-level competition in 2015. (swim4lifemagazine.it, 16 Mar 2016)
Sporting philosophy / motto
"It is not what you have been, it is more important what you become." (Facebook page, 18 Aug 2018)
Awards and honours
In November 2019 he received a sporting achievement award at the Italian National Olympic Committee [CONI] Sports Awards event in Cremona, Italy. (cremonasportiva.it, 27 Nov 2019)
Other sports
Prior to his accident he competed in motocross at international level. He also competed in Para rowing at the 2009 World Championships in Poznan, Poland. (fitadvisor.it, 09 Jul 2018; abilitychannel.tv, 01 Jan 2018; canottaggio.org, 18 Nov 2009; efremmorelli.it, 18 Nov 2009)
Impairment
At age 20 he was involved in an accident during a motocross race, which resulted in paraplegia. (Athlete, 03 Dec 2017; efremmorelli.it, 20 Nov 2009)
Other information
MOTOCROSS TO SWIMMING
He took up motocross at age 14, and went on to compete at the European championships before his accident. "During a race I had a serious accident. It was the end of a dream cultivated for years, and the beginning of a hard period for me. Doctors recommended aqua therapy and I started going to the pool. I had to learn to swim again from scratch, but I started swimming quite well. I began to get passionate about it, and by pure chance I came in contact with the president of a club and I was asked to do some training with them. I found it to be a quiet and pleasant environment, but at the same time serious and professional - just the way I like it. For me, this was a new beginning, or perhaps the continuation of a dream interrupted a few years earlier." (Facebook page, 18 Aug 2018; quadleaks.com, 31 Mar 2014; mxcenter.it, 18 Jun 2013; fmiquad.it, 18 Apr 2012; efremmorelli.it, 18 Nov 2009)