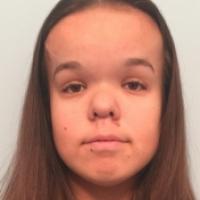 When and where did you begin this sport?
She took up the sport at Hokes Bluff High School in Alabama, United States of America.
Why this sport?
She initially took up the sport as a joke after previously trying soccer, cheerleading, basketball and volleyball. "I went from never even picking up a shot put a few years ago to having a chance to go to Rio."
Name of coach
Teri Jordan

Memorable sporting achievement
Competing at the 2016 Paralympic Games in Rio de Janeiro. (news.psu.edu, 12 Sep 2016)
Sporting philosophy / motto
"I'd like to break down barriers between able-bodied athletes and para-athletes." (highschoolsports.al.com, 11 Apr 2016)
Impairment
She was born with achondroplasia. From age 13 months she wore a brace on her back. At age seven she underwent spinal fusion surgery to prevent organ damage. (highschoolsports.al.com, 11 Apr 2016; childofchildrens.org, 2014)
Other information
RULE CHANGE
Ahead of her junior year in high school she lobbied the Alabama High School Athletic Association [AHSAA] in the United States of America to change the rule that only wheelchair athletes could compete in track events. In the 2014/15 season new guidelines were introduced, which allowed para-ambulatory athletes to compete in track events. Frederick was able to compete in the shot put, javelin, discus and the 100m under the new ruling. "I thought that I would never compete at high school level. I thought it'd be better to give that hope up. It's opened a whole new world for me. It's given me hope." (highschoolsports.al.com, 11 Apr 2016; lakeshore.org, 2016)