This winter season, Germany’s Andrea Rothfuss is going to take no prisoners on the ski slopes.

So far, the Paralympic silver and bronze medallist has had a pretty solid start, coming first or second in every race.

But it is that last part of that sentence that bothers her – coming second – especially as both times have been to her main rival, France's Marie Bochet.

“Marie Bochet’s strength is her technique,” Rothfuss said. “She has a very clean ski technique.”

“All my equipment is working well, and I’m just going to go into full attack this season. My main goal is to defend my downhill world championship title in La Molina (Spain).”

Twenty-one-year-old Rothfuss will focus on the giant slalom, which she won last year at the World Cup with 460 points, as Bochet finished in second place with 410 points. But at the 2013 World Cup event in Sestriere, Italy, in January, Bochet was 0.42 seconds faster in the first event and won by over two seconds the following day, when Rothfuss was suffering from stomach flu.

Rothfuss, a sociology student born without a left hand, skis with one pole just like her arch-rival Bochet.

The two compete against standing skiers with leg and arm impairments. Their times are factored according to the impairment.

“The biggest difference is that we can’t get up to speed as quickly, but in comparison to the other impairments that people have we’re the least limited,” Rothfuss said.

“Her strengths are her experience compared to mine - she started ski racing a few years earlier than me,” said Bochet, adding. “And her aggressiveness: She never gives up.”

“I think with Andrea, we have a very similar technical level and we are progressing at the same pace.”

Other top contenders for the women’s standing podium in La Molina include France’s Solene Jambaque and Italy’s Melania Corradini, but the latter is coming back from an injury she sustained earlier in the season.

Although Rothfuss is extremely familiar with the slopes in La Molina from previous World Cup races, she finds them extremely challenging.

“They’re not that easy,” she said. “At the start, you set off a bit easier and let’s say more comfortably, but then they have a very difficult steep slope which you have to get through and then it’s flatter again.

“You have to make sure that at the top you start well on the run and then it’s a really nice stretch to ski, but a challenge.” 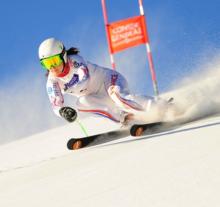