“If we’re not winning, then I feel like we came up short. My expectation is to definitely play in the championship game, and I feel we have the ability to win gold there.”

Editor's Note: Prior to the Parapan American Games in Guadalajara, Mexico, the International Paralympic Committee (IPC) is counting down the top 10 storylines to watch. Today, Canada’s men’s Wheelchair Basketball team falls in at No. 2.

A team is not the same without its best player.

So when Patrick Anderson – arguably the world’s top Wheelchair Basketball player – left Team Canada after the Beijing 2008 Paralympic Games to pursue a degree in music, a void opened up.

“I just didn’t really have any more goals and I really wasn’t motivated anymore to play at a competitive level,” Anderson said. “That commitment and drive sort of dissipated. It happens.”

Canada, which won gold at the 2000 and 2004 Paralympic Games and silver at the 2008 Games with Anderson, fell flat at the 2010 World Championships without him, finishing seventh.

Then, earlier this year, Anderson decided to jump back into the game with London 2012 in sight.

“I think I just kind of had a moment where I thought, ‘I won’t be able to do this at a high level anymore down the road. It’s my last chance,’” he said.

The Fergus, Ontario, native led his team to gold at the BT Paralympic World Cup in May and will now aim to do the same at the Parapan American Games in Guadalajara, Mexico, next week.

Canada’s team members are currently playing on various club or professional teams around the world, so the Parapans will offer them a chance to regroup for their last major international competition before London 2012.

Anderson, now enrolled at Hunter College and training on his own in New York, USA, has been tweaking his chair setup and trying to spend a lot of time with his teammates to reintegrate himself into the game.

He refers to his teammates as a “generation of groundbreakers” in the sport.

“The Wheelchair Basketball community’s pretty small in Canada, so we see each other a lot,” Anderson said. “We kind of grew up around each other. We had a lot of friendships that we built team chemistry on.”

His teammate, Joey Johnson, has definitely been a solid building block for that team chemistry. Johnson has been a member of the national team since 1995 and currently plays professionally for RSV Lahn-Dill in Germany so he can earn a bit of money while still training for Canada’s national squad.

“It’s kind of like killing two birds with one stone,” Johnson said.

The pair will be reunited this week to train before the Parapans begin Sunday (12 November).

In Guadalajara, there is only one viable option for them.

“I play the game to win,” Johnson said. “If we’re not winning, then I feel like we came up short. My expectation is to definitely play in the championship game, and I feel we have the ability to win gold there.”

The team will play four preliminary games in Guadalajara before the elimination round begins. Canada was selected to Group A and will be joined by Colombia, El Salvador and Mexico. Argentina, Brazil, Guatemala and the USA compose Group B.

The top three finishers will qualify for London 2012.

Since the Parapans began, Johnson said, it seems that Canada and the USA have always challenged each other for the title. The USA beat Canada in the finals in 2007 in Rio de Janeiro, Brazil.

“I’m assuming it will follow that trend and we will end up playing the U.S. in the final again,” Johnson said.

“But with that being said, across the world, the teams are getting tougher. I think the last World Championships can attest to that. We finished seventh, and we were literally one bad quarter from playing in the championship game. So, I think the top eight teams in the world right now are very close.

“I think Mexico is starting to come along now,” Johnson added. “They upset Brazil at the last qualifying tournament to qualify for the World Championships. And Brazil’s got a strong team.”

With its strong coaching and heavy veteran leadership, Canada should enter the competition next week quite poised.

Especially with Anderson eager to be surrounded by the large, lively crowds at his third Parapans experience.

“A lot of these Latin American countries really get excited and start singing songs and start competing with each other and try to out-sing each other,” Anderson said, recalling one of his favourite Parapan memories.

“And us, we’re a bunch of shy Canadians watching and listening. It’s a bit of a cultural, not clash, but contrast.”

And Anderson is persistently bashful about the individual legacy he has brought to Wheelchair Basketball, too.

“I think our sort of Michael Jordan or real transcendent star athlete […] who knows when that player’s going to come along,” he said, humbled. 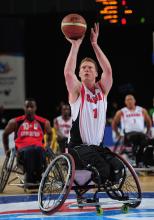