Two years until Paris 2024: Andrew Parsons on the transformative power of the Games 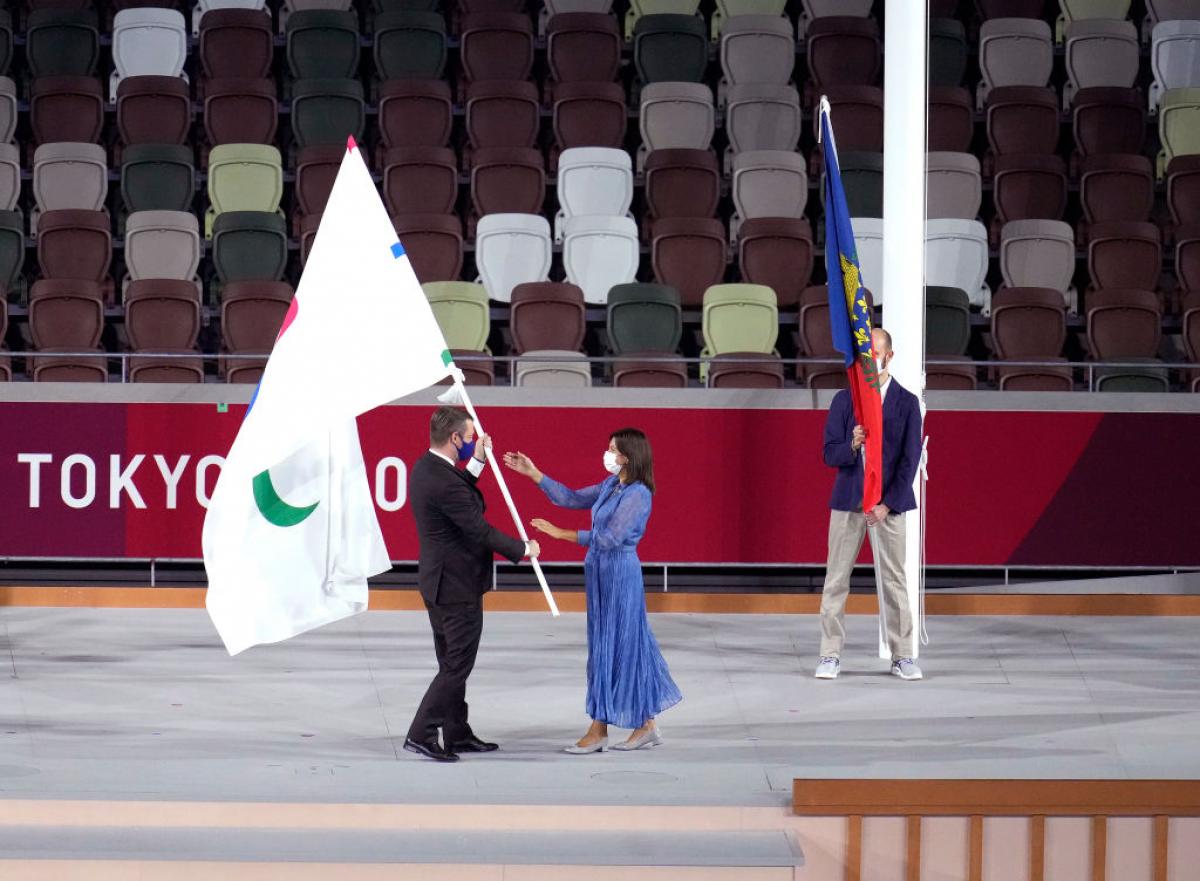 IPC President Andrew Parsons passed the Paralympic flag over to Anne Hidalgo, Mayor of Paris, during the handover ceremony at Tokyo 2020.
ⒸChristopher Jue/Getty Images
By IPC

France is set to welcome the Summer Paralympic Games for the first time in two years.

True to its reputation as a global entertainment centre, the French capital promises to deliver a true spectacle in the sports arenas when the Paris 2024 Paralympic Games open on 28 August.

The Games will also be a major milestone on the road to a more inclusive French society. It is the first time Paris is hosting the Summer Paralympics, to follow on the third edition of the Summer Olympic Games held in the city.

Record-breaking sports performances, iconic venues and a cultural programme unlike any other - there are countless things to look forward to in Paris in two years' time. We met up with International Paralympic Committee (IPC) President Andrew Parsons ahead of the milestone date to talk about the things he is most eager to see and the long-term effect that hosting the Paralympic Games could have on France.

Andrew Parsons: The narrative will be that the Paralympic Games are the most transformational event on earth, and I think Paris will be the perfect stage for that. It’s a spectacular city with venues at the heart of the city. The Paralympic athletes are delivering better and better performances, so the sport will be exciting. And then there is our own position as the Paralympic Movement and with #WeThe15 really positioning the Paralympic Games as a platform for change and for inclusion. That's what I see will be the big legacy of how these Games will be remembered forever.

These are the Games that will become known at a global level - not only by us who are part of the Paralympic Movement - as the Games that really helped to transform the world. This is the most transformational event, not only a sport event but event in general, on the planet.

IPC: What are some of the long-term objectives for Paris 2024 in terms of transforming the physical space as well as people's attitudes?

When it comes to infrastructure and accessibility, of course we would like to see improvements in the Paris transport system. The metro system, the main element of the transport system of Paris, is not accessible and we need to change legislation to make it accessible. We are working with some French authorities so that they can make those changes as legislative changes so we can have - not before the Games because we will not have time for that - as the legacy of the Games a better transport system in France in the greater Paris metropolitan area.

Merci beaucoup, Mayor @Anne_Hidalgo !! Always good to discuss the legacy @Paris2024 will generate in France and at a global level. @Paralympics #paris2024 https://t.co/YQ0o59eEjt

AP: Like in any place, some yes and some no. It's a matter of putting the right pressure, but also making sure that they see the opportunity, they see that this is good for them. It’s not only spending money because yes, it costs a lot to make something that is not accessible become accessible, especially in an old metro system like Paris. But this needs to be seen as an investment because you probably have a lot of Parisians who cannot go work, they cannot practise sport, they cannot go to university, school, to see their friends, to have an active life in society like everyone else because of the limitations in transport. They cannot cross the city, for example, so it needs to be seen as an investment.

And these people can be productive to society. It’s not only to take advantage and move around the city. They will work, they will be part of society, they will interact with their communities, so it's a very important piece of not only infrastructure investment, but social engineering.

IPC: Speaking of integration, this is an interesting month in sport because we had the Birmingham 2022 Commonwealth Games taking place and this was a fully integrated event. Paris 2024 too is unique in that the same logo is used for the Olympic and Paralympic Games. Is this kind of integration something that we're going to see more and more often leading up to Paris?

AP: In the sport movement I think we are going to see more and more integration, but I still believe that the Paralympic Games is not only a sport event. I see the Paralympic Games as the only global event on this planet that puts persons with disabilities centre stage, so I still believe that this is a platform that needs to be owned by persons with a disability in an exclusive way because it's their moment to shine, their moment to send a message, their moment to bring their agenda to the world.

So while I do believe that in many other sports events like the Commonwealth Games - and I was there for a few days - it's really great to see that level of integration, especially when the crowds, they don't differentiate a Para athlete from an athlete without a disability, I believe that when it comes to the biggest sport event at a global level for persons with disability, we should still have the same format as we have now. Olympics, transition, Paralympics. And in some other games, when it's possible, I think integration is amazing.

It was great to see, for example, the same attitude of the crowds in swimming events and Para swimming events. There was no differentiation when athletes were receiving their medals, when they were competing, when they were being introduced before the race. It was amazing to see that. And I saw that in many different sports. That's great because the crowds are recognising the Para athletes as athletes, full stop, and that's it. But I do believe that the Paralympic Games, they play an even bigger role. It’s not only sport.

I really felt at home @TonyEstanguet ! Thanks a lot! Always a pleasure to spend time with you and the incroyable team at @Paris2024, supporting them to deliver transformational Paralympic Games in two years. @Paralympics @WeThe15 #Paris2024 https://t.co/DdkT6MMU6Y

AP: The biggest opportunity that any country or city will have to bring more persons with disability into the sport is by hosting the Paralympics and all the different projects that you can implement around that opportunity.

I do see some projects in Paris and France. Some of them are led by the NPC of France, for example. They have an incredible initiative where they are going to the local clubs and they teach the club staff how to welcome persons with disability. They are not athletes yet and maybe they will not become athletes, but they are persons with disability who want to practise a sport. So it's not only preparing the people but also giving them some advice on the infrastructure of the club, what they can do - put a ramp here, a little bit of signage there - but mainly how the coaches and the physical education teachers can welcome a person with a disability to the local clubs.

Sport in France is organised in that way. The local clubs are the foundation of the sport system. So I think that in a matter of years we will see, hopefully, good athletes coming from that initiative, but I think even better than that is to see more persons with disability benefitting from the simple fact that they do physical activity.

IPC: The Paralympic Games are held every four years. In the lead-up to Paris 2024, what is the IPC doing to continue making a difference when the Games are not going on?

AP: It's a combination of the things we do. One, for example, is working with the Organising Committee, but also with the broadcasters around the world to promote the Games and not only promote the Games during the Paralympic period, but between now and then.

So I think it's how we can have more support opportunities, how we can work with the National Paralympic Committees and the IFs to create better pathways for the athletes from grassroots to elite. And then the PARA SPORT programme, it could be as important as the Paralympic Games.

A day to celebrate sports🏀🏐

Paralympic athletes featured prominently at @Paris2024's #OlympicDay celebration while its tens of thousands of participants got the opportunity to discover several Paralympic sports.#Paralympics #Sports #Paris2024

IPC: What are the things that impressed you the most during your site visits to Paris so far? What are you looking forward to during the Games?

Paris is probably the most beautiful city on the planet. To have that scenario and with the level of sport that the athletes are going to put together and with our strategy of using the Games as a platform, I think we will finally position the Paralympic Games as the most transformative event on the planet. People around the world will say Paralympic Games, they change the world. Yes, we don't change the world from black to white overnight, but the Paralympic Movement really changes the world. That's my dream for the Games in France.

Crowned European champions one month ago, the French blind football team now has an even bigger goal ahead: to win gold at the home #Paris2024 #Paralympics @Paris2024 @FFHandisport @EquipeFRA @FRAparalympique @IBSAB1Football

Being there and visiting the Village, some of the venues, and trying to imagine how a specific sport competition is going to be, the interaction with the Parisians, with the people who come from abroad to attend the Games and what people from around the world will see through broadcasting, I think the impact is going to be huge, as well as finally having spectators after two editions of the Games without spectators.

IPC: And it doesn't get any better than hosting sports competitions on the lawn in front of the Eiffel Tower, does it?

AP: No, that's going to be absolutely incredible, but other sports as well. The Eiffel Tower is the most iconic so to have blind football there would be absolutely incredible. I want to watch some matches there. I don't know if I will have the time for it, but whoever attends it, what an incredible experience that would be. It’s not a venue in the middle of nowhere or in a park that's kind of dry. No, it's in the middle of the city. It's vibrant. You have all the tourists, even the ones who are visiting Paris not because of the Games, so I can't wait. It will be amazing. 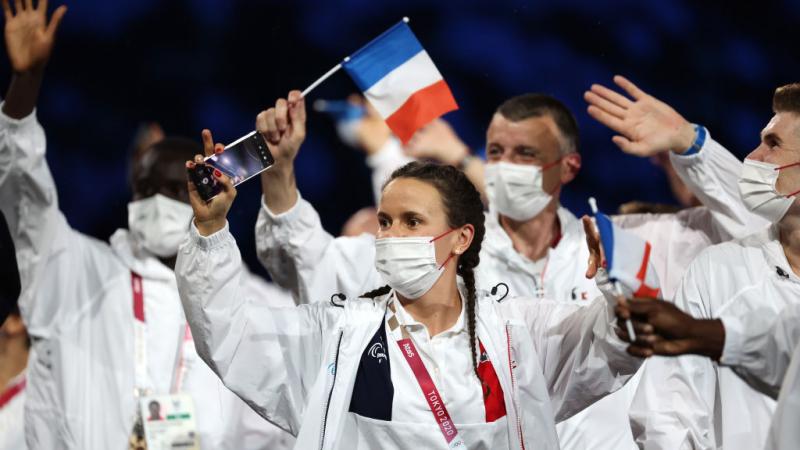 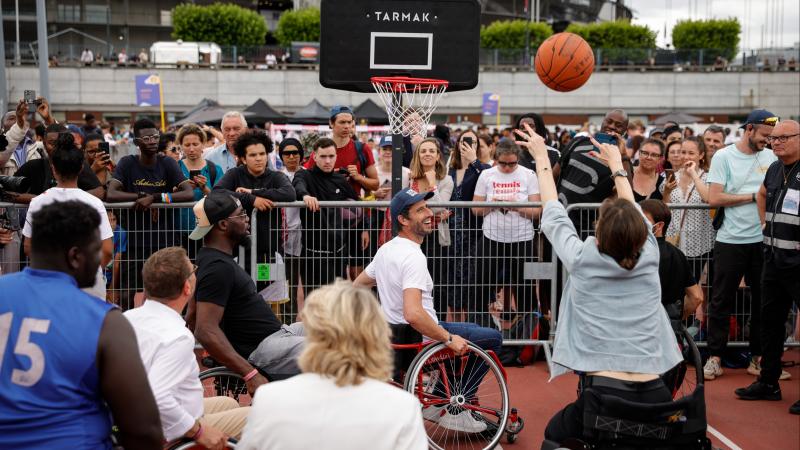 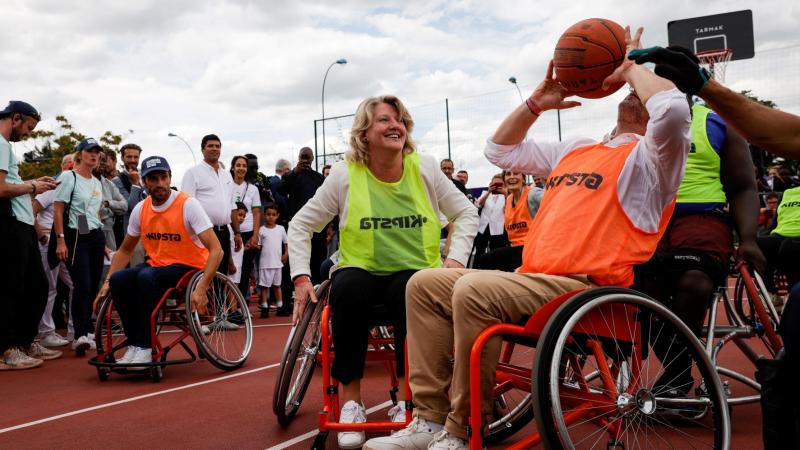 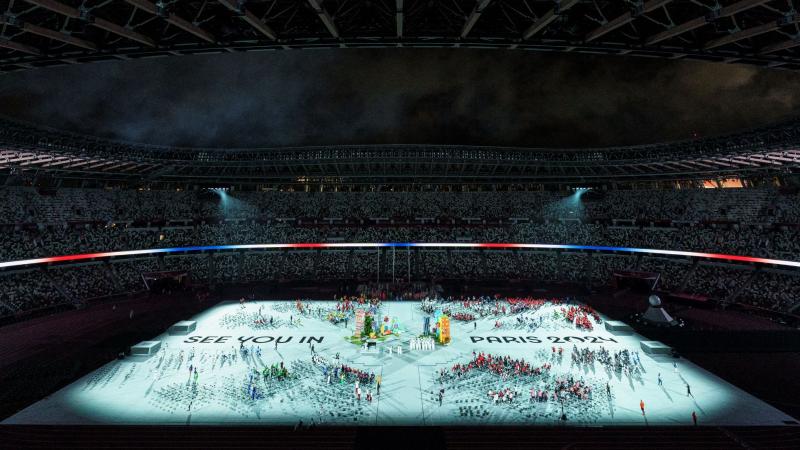