American Alana Nichols is a dual-sport athlete in Alpine Skiing and Wheelchair Basketball, but is currently putting all of her focus on London 2012. 12 Jun 2012 By IPC

“I’m kind of always on, but I try to take breaths and stay grounded when I can.”

You can see it in the eyes of Alana Nichols that she hardly has time to sleep.

At the BT Paralympic World Cup last month in Manchester, where USA’s women’s Wheelchair Basketball team claimed bronze, Nichols had a lot on her plate.

The dual-sport Paralympic athlete had been going from training and media appearances to her sister’s college graduation and hopping on another plane for a competition.

Between Alpine Skiing and Wheelchair Basketball it is a lot for the American to manage.

But now, just over two months away from London 2012, her sole focus is on the court.

“It’s a relief to be doing just one sport at the moment,” Nichols said.

“It wasn’t all it was cracked up to be doing both at the same time. You want to commit to one and put all your heart and all your soul into one sport, so I’m glad that I can focus right now on basketball, and after London I’ll change gears and switch over to skiing and put all of my focus on that.”

Nichols had just one week between her transition from the slopes to the court, which she used to attend a fundraiser.

“I’m kind of always on, but I try to take breaths and stay grounded when I can,” she said.

But after finishing up a winter season in which she took six medals – including three golds – on the slopes – she should have nothing to hang her head about.

“I actually had a really great season,” Nichols said. “I wasn’t putting all of my focus on that because London was right around the corner, but it turns out I really finished strong when we had World Cup finals up in Panorama. I ended up winning three Super-G’s in a row, which I’ve never done, so I was really excited about that.”

Nichols, who won two golds, a silver and a bronze at the Vancouver 2010 Paralympic Winter Games and gold at the Beijing 2008 Paralympic Games, was the first American woman to win gold in both the Summer and Winter Games.

The New Mexico native has always been an athlete, and it was sports that helped her recover from an accident on the slopes aged 17. She broke her spine while attempting a backflip on a snowboard and became paralyzed from the waist down.

“Basketball was the thing that got me back into life after my accident and got me back into being a competitor,” she said. “I always wanted to try skiing again, but it was really basketball that paved the way for me, not only to go to college, but to get to the Paralympics.”

So with two sporting careers going on simultaneously, where does her heart lie?

“At the moment basketball,” Nichols said. “I kind of stay in the moment. I love each sport differently. I love right now getting to learn and grow with my teammates, and sharing the journey is awesome. I have teammates on the ski team, but it’s a lot different when you have 12 girls and five people on the court all trying to accomplish one thing.”

USA’s women are the two-time defending Paralympic champions and won the most recent World Championships in 2010, but it is a different squad now than four years ago.

The Americans were a bit disappointed with their second-place and third-place finishes at the last months Four Nations Tournament and BT Paralympic World Cup, respectively.

“The journey is up and down, it’s left and right, and it’s kind of all over the place. That’s kind of what we were expecting,” Nichols said.

“Every single turn and every up and down we’re learning. Personally for me, I feel great. I’m in great shape, and going to Germany was a great experience just to see and get to play against more teams. We’ve been training for so long now on our own, so it’s just really great to get to play.”

Nichols is now living and training in Denver, a basketball town with the mountains just minutes away, and she is confident about what lies in store for USA’s team in London.

“We’re right where we need to be,” Nichols said. “We’re feeling really good about everything and we’re building.” 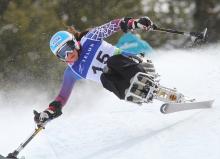