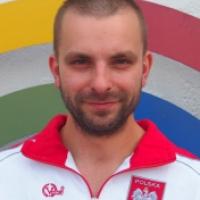 When and where did you begin this sport?
He first began shooting in 1996 in Wroclaw, Poland, prior to his accident. He returned to the sport as a Para shooter in 2005.
Why this sport?
"I love to be active and to do sport, I feel bad when I am not doing it. Since my early childhood I have always done sport. For 10 years I was a member of a swimming club and then in 1996 I started shooting training. I see my future in this sport and I hope that I still can achieve a lot."
Club / Team
Skorpion Polkowice: Poland
Name of coach
Marek Marucha [national], POL
Handedness
Right

Hobbies
Watching movies, spending time in his garden, DIY. (paralympic.org.pl, 01 Jan 2017)
Memorable sporting achievement
Competing at the 2008 and 2016 Paralympic Games, and winning gold in SH1 10m air pistol at the 2013 European Championships in Alicante, Spain. (paralympic.org.pl, 01 Jan 2017)
Injuries
He was ruled out of contention for the 2012 Paralympic Games in London after straining his arm. The injury developed into inflammation of the elbow. (paralympic.org, 09 Apr 2013)
Sporting philosophy / motto
"Aim for the moon because even if you miss, you'll be among the stars." (paralympic.org.pl, 01 Jan 2017)
Ambitions
To win a medal at the 2020 Paralympic Games in Tokyo. (paralympic.org, 08 May 2017)
Impairment
He was involved in an accident in 1999 that resulted in paraplegia. (prw.pl, 2013)
Other information
DISAPPOINTMENT IN RIO
His performance at the 2016 Paralympic Games in Rio de Janeiro was affected by spasms, general fatigue, and problems with his spinal cord. "I don't really know where those spasms came from, probably the climate. All I know is that I suffered from them from the time of the very first Rio training session until the end of the competition. It's particularly tragic for me since in practically every event leading up to the Games, I had shot results that would have secured me a spot in each of those finals." (paralympic.org, 08 May 2017)

POLITICIAN
He is active in social work and projects aimed at breaking down barriers for people living with an impairment in Poland. In 2014 he was elected as a councillor for the local government in his hometown of Polkowice. His election campaign centred around promises to improve living conditions in his part of the city, enhance facilities for people with an impairment and older citizens, as well as promoting sport for children and youth. In November 2019 he was appointed as an official representing people with an impairment by the government of Polkowice. (LinkedIn profile, 01 Nov 2019; miedziowe.pl, 06 Aug 2021; filiprodzik.pl, 25 Apr 2016)

CLUB FOUNDER
He founded and has served as president and coach of the sports club Skorpion Polkowice in Poland. The club has sections for rugby, cycling and shooting, and promoting Para sport is one of its main goals. (polkowice.eu, 29 Oct 2013; tutajpolkowice.pl, 07 Aug 2015)