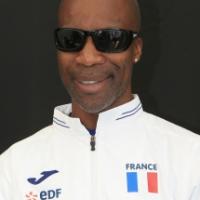 When and where did you begin this sport?
He took up athletics at age 14 at school in France.
Why this sport?
He was inspired to take up the sport after watching US sprinter Carl Lewis. A sports teacher also encouraged him to practise sprinting.
Club / Team
RCF Issy Avia: Issy-les-Moulineaux, FRA

Hero / Idol
US sprinter Carl Lewis. (actu.fr, 26 Apr 2018)
Ambitions
To win a medal at the 2020 Paralympic Games in Tokyo. (sans-filtre.fr, 12 Sep 2017)
Impairment
At age three he was diagnosed with a visual impairment, which led to his father, a doctor, giving him some eye drops. At age six he travelled with his mother to Paris, France, where he was assessed by specialist doctors, who diagnosed him with cataracts. He underwent surgery but his retina had been previously damaged by the eye drops. He was later diagnosed with retinitis pigmentosa. (leparisien.fr, 16 Jul 2017)
Other information
RETIREMENT PLANS
He originally planned to retire from the sport following the 2021 World Championships in Eugene, OR, United States of America. However, due to the postponement of the 2020 Paralympic Games in Tokyo, he said he would retire after the rescheduled Games in 2021. "I had already planned that the end of my career would not be in Tokyo but a year later [in 2021]. Now these Games will really be the end of the game." (sport24.lefigaro.fr, 04 Jul 2020)

OCCUPATION
He works for France's national railway network, SNCF. "When I arrived at SNCF, I realised the need of having something to do after my sporting career. This job allows me to turn the page of my life. Because after my sports career is over, life still goes on." (sncf.com, 29 Jan 2020; sncf.com, 24 Sep 2020)

FROM DR CONGO TO FRANCE
Born in the Democratic Republic of the Congo, his mother took him to France in 1989 so that he could receive treatment for his visual impairment. He gained French citizenship in 2004. (athletesmondiaux.com, 20 Nov 2010; leparisien.fr, 16 Jul 2017)