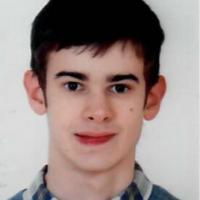 When and where did you begin this sport?
He took up running at age five. He began competing at age 10.
Why this sport?
He felt the sport gave him freedom and independence.
Club / Team
Red Star Athletics Club: Glasgow, SCO
Name of coach
David McPhee; John Owens

In 2015 he received a Trophy for Commitment to RaceRunning from Ayr Seaforth Athletic Club in Scotland. (ayrseaforth.co.uk, 11 Nov 2016)

In 2014 he carried the Queen's Baton through Rozelle Park in South Ayrshire, Scotland, ahead of the 2014 Commonwealth Games in Glasgow, Scotland. (heraldscotland.com, 20 Jun 2014)

In 2012 he won the Young Scot of the Year Award for Sport in recognition of his international performances and his role in promoting RaceRunning in Scotland. (kyle.sayr.sch.uk, 31 Oct 2013; dailyrecord.co.uk, 10 Jul 2011)

In 2011 he won Ayrshire Sportsability's Young Athlete of the Year award. (kyle.sayr.sch.uk, 31 Oct 2013; dailyrecord.co.uk, 10 Jul 2011)
Famous relatives
His father Peter Drysdale has served as his personal coach. (ayrshiresportsability.org.uk, 30 Nov 2013)
Impairment
He was born with low muscle tone, which means he has difficulty with all muscle movements and his balance. He uses a walker and communicates with the aid of an electronic device. (kyle.sayr.sch.uk, 31 Oct 2013; south-ayshire.gov.uk, 15 Nov 2010)
Other information
DEATH OF COACH
He dedicated the gold medal he won in the RR3 100m at the 2019 World Championships in Dubai, United Arab Emirates, to his former coach Janice Eaglesham, who had passed away four months earlier. "She would be so proud. Janice gave everyone an opportunity, regardless of impairment or ability. I couldn't have asked for a better person to guide me through the experiences of being an international athlete." (bbc.co.uk, 15 Nov 2019; glasgowtimes.co.uk, 01 Aug 2019)