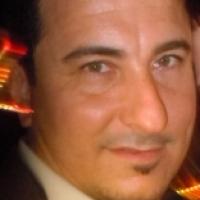 When and where did you begin this sport?
He took up Para ice hockey in 2004 in Turin, Italy.
Why this sport?
He wanted to compete at the 2006 Paralympic Winter Games in Turin.
Preferred position / style / stance / technique
Forward

Nicknames
Greg (superabile.it, 26 Mar 2010)
Memorable sporting achievement
Claiming gold at the 2011 European Championships in Solleftea, Sweden, and winning silver at the 2016 European Championships in Ostersund, Sweden. (Athlete, 10 Mar 2018)
Most influential person in career
Italian Para ice hockey player Andrea Chiarotti. (Athlete, 10 Mar 2018)
Hero / Idol
French footballer Michel Platini, US basketball player Michael Jordan. (Athlete, 10 Mar 2018)
Sporting philosophy / motto
"Perfection is unattainable, but in trying to achieve it we can reach excellence, or at least we know we have given our best." (paralympic.org, 06 Feb 2013)
Awards and honours
He received an acknowledgement from the Piedmont region, in Italy, for participating at the 2018 Paralympic Winter Games. (sportfair.it, 11 May 2018)
Other sports
He has represented Italy in Para snowboard. He finished 19th in snowboard cross standing at the 2012 World Championships in Orcieres, France. He has also competed in international wheelchair tennis tournaments. (sportorino.com, 27 Jun 2018; SportsDeskOnline, 01 Dec 2015; paralympic.org, 06 Feb 2013)
Impairment
His left leg was amputated above the knee after he was involved in a car accident in November 1998. (Athlete, 08 Mar 2014)
Other information
HOCKEY RETIREMENT
In 2018 he decided to put an end to his Para ice hockey career. He then took up wheelchair tennis and competed at his first tournament in the BNL Open in Grugliasco, Italy, in June 2018. "I tried it for curiosity. I am not used to the wheelchair, and the push movement with the arms is exactly the opposite as in Para ice hockey. But fortunately I had learnt the basics when I was younger, even though I had to adapt them to the sitting position." (sportorino.com, 27 Jun 2018)

OCCUPATION
He works as a clinical operations lead in Turin, Italy. (Athlete, 10 Mar 2018)