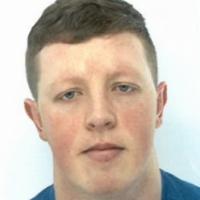 When and where did you begin this sport?
He took up Para athletics in 2017.
Why this sport?
While he was coaching a junior rugby union team a coach suggested he try Para athletics. "I started throwing and I was having fun."
Club / Team
Swansea Harriers: Wales
Name of coach
Nathan Stephens

Other sports
He represented Wales in rugby union at U16 and U18 level, and signed a development contract with Welsh professional rugby union side Ospreys in May 2014. (dai-sport.com, 15 May 2019; dai-sport.com, 26 Jul 2021)
Ambitions
To compete at the 2020 Paralympic Games in Tokyo. (bbc.co.uk, 14 Jun 2019)
Impairment
In January 2015 he lost the mobility of his right foot after damaging a nerve in an injury he sustained while playing rugby union in Swansea, Wales. "Essentially, I have no feeling in my right foot, especially on the top where I have no movement in it." (dai-sport.com, 15 May 2019)
Other information
INJURY
He lost the mobility of his right foot as a result of a nerve injury sustained while playing rugby union in January 2015, having only entered the match after a teammate was sent off. "It was the last play of the game. I was carrying the ball and as I ran over someone just came under my leg. I tore my anterior cruciate ligament [ACL], posterior cruciate ligament [PCL] and lateral collateral ligament [LCL], and I tore my biceps femoris [a thigh muscle]. I also tore my popliteus [a muscle in the knee joint], the lateral head of the gastrocnemius [one of the calf's major muscles] and the common peroneal nerve. It is one of the worst knee injuries you can have and every time I see a physio they are really squeamish when I tell them the extent of the damage. I'm not bitter about it at all, I did everything I could to get back. I've had everything I needed, the best surgeons, the best specialists to look at it. They worked tirelessly to try and stimulate the nerve. Unfortunately, it doesn't matter how hard you work on a nerve, if it doesn't want to come back it's not going to. What happened to me is not the nicest thing, but there are far worse things that can happen to you in life." (dai-sport.com, 15 May 2019)

RECOVERY
Before his impairment, he had represented Wales at junior level in rugby union and signed a contract with professional club Ospreys. He said the physical and emotional recovery from the injury that ended his rugby career was difficult. "I was in a bit of a hole. I went from this big strong Welsh rugby player to this guy who could not move his foot or get out of bed. I lost close to 20 kilograms and I was not myself for probably a year. Your sport becomes your identity. I was a rugby player so what am I going to be if I am not one? Seeing my teammates playing, I was just wondering why I was here and why can't I do this? It was hard for me to watch a couple of years ago [speaking in 2019]. When you have to stop playing rugby at that age you have a loss of identity, but over the last couple of years I've found that identity again through athletics." He also said he struggled to cope with lifestyle changes. "I have learned how to walk again. The first year you think people are watching you and you feel so self-conscious." (bbc.co.uk, 14 Jun 2019; dai-sport.com, 26 Nov 2020)