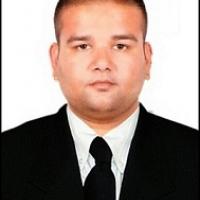 When and where did you begin this sport?
He took up shooting Para sport in 2015 through the All India University Sports Competition. In 2016 he joined the Gun For Glory Shooting Academy in Pune, India, where coaches Vijay Jadhavar and Pawan Kumar Singh motivated him to compete at the highest level.
Why this sport?
"I was a national level taekwondo player and had only one dream, to represent my country in the world championships and the Olympics. But my accident changed my life - four years of hospitals and the disabilities robbed me of that opportunity. But my dream of donning Indian colours never dissipated. I am disabled in the lower limbs, which ensured that I could never represent India in taekwondo, so I shifted sports and took up shooting instead."

Most influential person in career
His mother Sushma Tiwari. (milaap.org, 06 Mar 2017)
Sporting philosophy / motto
"If your dreams don't scare you, then dream bigger." (Facebook profile, 15 Mar 2019)
Other sports
Prior to his accident he competed in taekwondo at national level in India. (milaap.org, 06 Mar 2017)
Ambitions
To win a medal at the 2020 Paralympic Games in Tokyo. (Facebook profile, 15 Mar 2019; hindustantimes.com, 19 Oct 2016)
Impairment
His impairment is the result of a traffic accident. "I was an engineering student from Bhopal. I was on my way for my semester exams in February 2011 when my bike was hit by a truck. I remained in the hospital until 2015 and went through 17 surgeries." (milaap.org, 06 Mar 2017)
Other information
HELPING HAND
He broke an Asian record in shooting Para sport trap at the 2018 World Championships in Lonato, Italy, and revealed after the competition that he had only been able to accomplish the feat due to the generosity of his national team colleague Balendu Singh. "I had to sell off my car in 2016 in order to support myself for the sport since the cost of ammunitions and equipment is exorbitant. However, the money did not last long and I had nowhere to go. It is then that my teammate Balendu lent me his gun and financially supported me for the National Games." (business-standard.com, 08 Oct 2018)