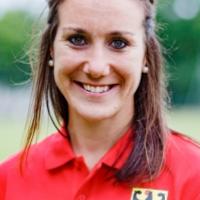 When and where did you begin this sport?
She began running at age four in South Africa.
Why this sport?
She followed her sister into the sport. After her accident she wanted to return to running so she took up Para athletics. "Running has been my dream since I was four. [After the recovery] I called my former trainer, I said I want to do it again, that I do not care if I'm going to be the last or just 20 seconds slower. The main thing is that I'm running."
Club / Team
TSV Bayer 04 Leverkusen: Germany
Name of coach
Karl-Heinz Due [club]; Marion Peters [national]

Nicknames
Aunt Irmie, Irmchen, Irm (Facebook profile, 11 Oct 2020; tellerreport.com, 13 Nov 2019)
Memorable sporting achievement
Winning silver in the T44 400m at the 2016 Paralympic Games in Rio de Janeiro. (Athlete, 06 Nov 2019)
Most influential person in career
Her family. (Athlete, 06 Nov 2019)
Hero / Idol
South African Para swimmer Natalie Du Toit. (Athlete, 06 Nov 2019)
Injuries
In 2017 she was sidelined for six weeks with a foot injury but recovered in time to compete at that year's world championships in London, England, where she won gold in the T44 400m. (eurosport.de, 16 Jul 2017; wdr.de, 12 Jul 2017)
Sporting philosophy / motto
"Run with your heart not your legs." (Athlete, 17 Jul 2017)
Awards and honours
In 2019 she was named Para Athlete of the Year in Germany. (dw.com, 06 Jan 2020)
Other sports
She was a junior hurdler and sprinter at national level in South Africa in able-bodied athletics before her injury in 2009. (sport1.de, 28 Oct 2015)
Ambitions
To compete at the 2020 Paralympic Games in Tokyo. (morgenpost.de, 21 Aug 2018)
Impairment
In 2009 she damaged a nerve in her lower right leg while competing as a hurdler. The injury resulted in paralysis below the knee. "I started out as a non-disabled person for South Africa for many years. I got injured when I got stuck on a hurdle at our national championships and I've had a drop foot since then. Every time I see someone around a hurdle, I have to look away." (dw.com, 06 Jan 2020; northcliffmelvilletimes.co.za, 02 Apr 2015; deutsche-paralympische-mannschaft.de, 12 Feb 2015; fanvondir.de, 2021)
Other information
SOUTH AFRICA TO GERMANY
She received certification as a Para athlete at provincial level in South Africa, but was unable to get certified at national level, which prevented her from competing at the South African national championships. As a result she moved to Germany, where her mother was born, and earned classification there ahead of the 2014 Grand Prix in Berlin. Speaking in 2020 she said the thought of classification still disturbs her. "I still think about it. If I hear that I have to go for a classification, I start getting the jitters. I really don't want to go for classification ever again. I have been classified after that [2014] twice, both confirmed. But every time, it is such a stressful moment." (dw.com, 06 Jan 2020; sport1.de, 28 Oct 2015)

OCCUPATION
She works as an auditor at KPMG AG Wirtschaftsprufungsgesellschaft in Germany. (dw.com, 06 Jan 2020)