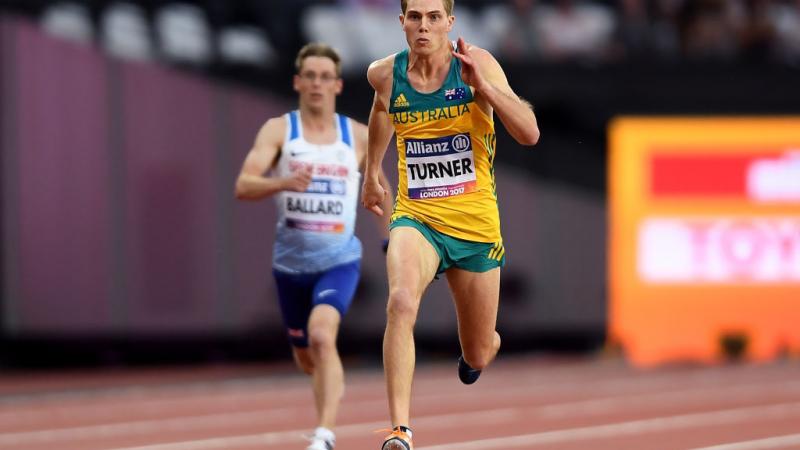 Australian James Turner has shown terrific form at the last two major global events – Rio 2016 and London 2017 - having only taken up Para athletics in 2015.

A former Para football player, he switched to Para athletics after the Australian national Para football seven-a-side team failed to qualify for Rio 2016.

At the Rio Paralympic Games he raced to gold in the 800m T36 after setting a terrific pace from the gun, crossing the line in world record time (2:02.39). He was subsequently awarded the Medal of Order of Australia in recognition of his success.

Less than 12 months later at the 2017 World Championships in London, Great Britain, Turner was at it again – but never mind one title, the Wollongong athlete claimed a hat trick of gold medals with wins in the 200m, 400m and 800m T36, dominating every race.

When and where did you begin this sport?
He got involved in athletics for the first time at age eight at Forster Tuncurry Little Athletics in New South Wales, Australia. He took up Para athletics in 2015.
Why this sport?
He switched to Para athletics after the Australian national Para football seven-a-side team failed to qualify for the 2016 Paralympic Games.
Club / Team
ACT Para-Athletics Talent Squad: Australia
Name of coach
Iryna Dvoskina [national, personal], UKR
Training Regime
He trains for about 20 hours a week, which includes work in the gym on stability and balance exercises. In 2020 he and coach Iryna Dvoskina altered his training schedule to include more explosive work, which they balanced with endurance sessions such as cross-country.

Nicknames
Jimmy (Athlete, 06 Nov 2019)
Hobbies
Drawing, reading, writing. (Athlete, 06 Nov 2019)
Memorable sporting achievement
Breaking the world record in the men's T36 800m at the 2016 Paralympic Games in Rio de Janeiro. (Athlete, 27 Aug 2021; db.ipc-services.org, 18 Nov 2019)
Most influential person in career
Coach Iryna Dvoskina. (Athlete, 27 Aug 2021)
Hero / Idol
Australian Para sprinter Evan O'Hanlon. (Athlete, 27 Aug 2021)
Sporting philosophy / motto
"I have been asked what motivates me, and it is quite a hard question to answer. It has changed over the years. It used to be fear of being a burden to the world, and while that's diminished it's still a bit there. I think now there are two main motivations. One. I love running, I love sport, I love training, I love competing. Just doing the sport is enough motivation, but it's not the only reason. Two. I have a desire to make a positive impact on the world, one that a younger version of me would appreciate. I want to show that we can all be better than what other people's imaginations allow." (Instagram profile, 01 Feb 2020)
Awards and honours
In 2019/20 he was named Senior Para Athlete of the Year by Athletics New South Wales in Australia. (nswathletics.org.au, 12 May 2020)

In 2016 and 2017 he was named Sports Person of the Year by the University of Wollongong in Australia. (illawarramercury.com.au, 27 Oct 2017)

In January 2017 he received the Medal of the Order of Australia [OAM] in recognition of the gold medal he won at the 2016 Paralympic Games in Rio de Janeiro. (paralympic.org, 28 Jan 2017)

In 2016 he was named Paralympic Rookie of the Year by the Australian Paralympic Committee [APC]. (paralympic.org, 09 Dec 2016)

In 2013 he was named Player of the Year for the 'Pararoos' - Australia's Para seven-a-side national football team. (illawarramercury.com.au, 23 Jun 2020)
Other sports
He has played seven-a-side Para football for Australia, including at the world championships in 2015 and 2017. (Athlete, 27 Aug 2021; ifcpf.com, 11 Sep 2017; cp2015.com, 16 Jun 2015)
Ambitions
To win the T36 100m and 400m at the 2020 Paralympic Games in Tokyo. (athletics.com.au, 20 Dec 2020)
Impairment
He has cerebral palsy. (sbs.com.au, 08 Sep 2017)
Other information
RIO COMEDOWN
He sought help from a sports psychologist following the 2016 Paralympic Games in Rio de Janeiro, where he had won gold and broken the world record in the T36 800m. He believes his issues stemmed from childhood, when he was never able to beat the other children at school, and as a result he had promised himself that one day he would be the best at something. "I won [in Rio de Janeiro], I broke the world record and everything was the same. I wasn't profoundly changed, I was still the same guy. I came to realise that nothing that I did would fix all my problems and that was a hard realisation for me. [Winning] was the easy part. [Before it] gave me hope that I would one day be 'truly happy', and now it was gone. The time between Rio and the 2017 World Championships [in London, England] was probably the hardest time in my life. I felt useless and unhappy, and how can someone who's the best in the world feel useless and unhappy? I lost all hope. I developed unhealthy and self-destructive habits. I almost didn't get through it. I now promise myself that I'll always have a new dream, and that it'll be one I have no right to achieve. That way, I'll always have a reason to keep going." (paralympic.org, 03 May 2018; Instagram profile, 01 Sep 2019)

FURTHER EDUCATION
He has also studied at the University of Wollongong in Australia. (athletics.com.au, 01 Feb 2017)