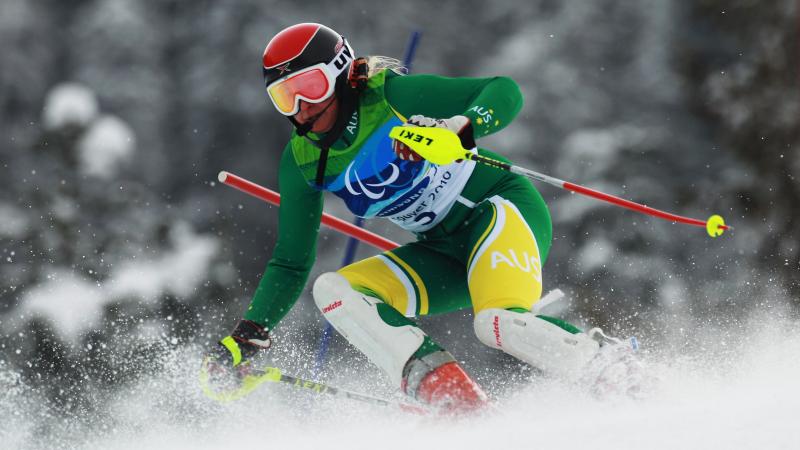 When and where did you begin this sport?
She took up Para cycling track in late 2014.
Why this sport?
She was recruited to Para cycling track by Glenn Doney, the head cycling coach at the Victorian Institute of Sport [VIS] in Melbourne, VIC, Australia. "As soon as we started diving up and down the boards I knew it was the sport I wanted to do."
Name of coach
Glenn Doney, AUS
Training Regime
Her weekly training regime includes two track sessions, three strength and conditioning sessions and three to four ergo sessions.

In June 2012 she tore the meniscus in her knee while training. She recovered from the injury in time to compete at the 2012 Paralympic Games in London, but had knee surgery afterwards. (surfcoasttimes.com.au, 19 Oct 2012)
Sporting philosophy / motto
"Believe in yourself and love what you do. There will be many highs and lows along the journey but staying focused on what you want to achieve will allow you to overcome anything." (girlinspo.com, 27 Oct 2016)
Awards and honours
She was named the 2014 Female Sportsperson of the Year at the Victorian Para Sport and Recreation Awards in Melbourne, VIC, Australia. (disabledwintersport.com.au, 05 Dec 2014)

In 2010 she was named the Female Australian Paralympian of the Year. (paralympic.org.au, 04 Nov 2011)
Other sports
She won bronze in alpine skiing at both the 2010 and 2014 Paralympic Winter Games. She also competed in athletics [javelin and long jump] at the 2012 Paralympic Games in London. She participated for the Australian U16 netball team, and also represented the state of Victoria in basketball. (paralympic.org, 2016; ondon2012.paralympic.org.au, 11 Jan 2013)
Famous relatives
Her mother Doreen has won six gold medals at world indoor rowing championships. (mountainwatch.com, 12 March 2010)
Impairment
She was born with macular dystrophy, a genetic condition that affects the retina. (heraldsun.com.au, 16 Mar 2010)
Other information
NATIONAL FIRSTS
In 2012 she became the first athlete to represent Australia at both the summer and winter Paralympic Games, after competing in long jump and javelin in London and alpine skiing at the 2010 Games in Vancouver. She was the first Australian woman to win a medal at a Paralympic Winter Games, claiming bronze in the slalom in 2010 in Vancouver. She was also the first Australian woman to win medals at international level in both winter and summer Para sports, first winning bronze at the 2010 Paralympic Winter Games in Vancouver and then silver in long jump at the 2011 World Championships in Christchurch, New Zealand. (jessgallagher.com.au, 04 Jul 2013; paralympic.org.au, 2012; surfcoasttimes.com.au, 19 Oct 2012)

BEIJING EXPERIENCE
She attended the 2008 Paralympic Games in Beijing as a medical administrator. She had intended to compete in long jump and shot put, but was told her visual impairment was not severe enough. "Now that I look back, even though it was incredibly challenging I learnt so much about myself, because going into it I thought there was no way I could be any more motivated." (paralympic.org.au, 13 Jul 2009; kerwinrae.com, 28 Aug 2017)