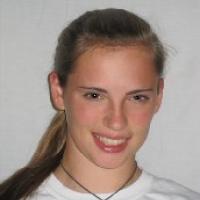 When and where did you begin this sport?
She was introduced to wheelchair sports at age nine.
Why this sport?
"For a long time I was just getting into whatever I could and that wasn't really anything that was satisfying. It was kind of limited to cheerleading and horseback riding. I met a guy on a handcycle and he started telling me about wheelchair sports. I started playing them, and as soon as I started I was hooked. I knew I'm no longer this breakable little thing, I'm an athlete."
Club / Team
University of Illinois Wheelchair Racing Team: Champaign, IL, USA
Name of coach
Adam Bleakney [club], USA

She was named the 2008 Junior Athlete of the Year by magazine Sports 'N Spokes. (orthocarolina.com, Mar 2011)
Other sports
She competed in para-swimming at the 2010 World Junior Games in Olomouc, Czech Republic, and has played wheelchair basketball for the United States of America at U20 level. (orthocarolina.com, Mar 2011; iwasf.com, 23 Aug 2010)
Impairment
She was born with spina bifida. This led to neuromuscular scoliosis and an 80 degree curvature in her spine. In 2006 she had posterior fusion surgery to help straighten her spine. (orthocarolina.com, Mar 2011)
Other information
STUDYING ABROAD
In 2015 she completed an exchange semester at the National University of Singapore. (blog.nus.edu.sg, 19 Nov 2015)