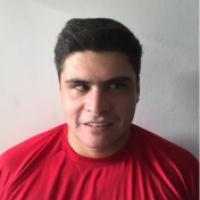 Why this sport?
His first and long-time coach Raul Banegas saw he had the correct abilities for the sport.
Name of coach
Javier Alvarez [national]
Training Regime
He trains at the High Performance Centre [CENARD] in Buenos Aires, Argentina.

“Medals are won by training; competitions are just to collect them.” (Facebook page, 01 Oct 2015)
Awards and honours
In 2014 he was named the Best Athlete of Roque Perez, Argentina. (rperez.mun.gba.gov.ar, 13 Dec 2014)
Impairment
His eyesight is affected by 90% due to a congenital condition. (revistagenesis.com, 03 Feb 2015)