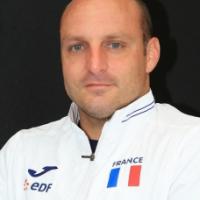 When and where did you begin this sport?
He began the sport in 2000.
Why this sport?
He tried several Para sports at a rehabilitation centre before settling on athletics. "I found a reason to surpass myself in athletics."
Club / Team
Groupe Athletique Haut Saonois [GAHS]: Vesoul, FRA

Hobbies
Go-karting. (estrepublicain.fr, 01 Mar 2021)
Memorable sporting achievement
Winning bronze in the 4x400m relay at the 2008 Paralympic Games in Beijing, and in the 5000m at the 2012 Paralympic Games in London. (Athlete, 20 Aug 2018)
Most influential person in career
French wheelchair racer Claude Issorat. (Athlete, 23 Oct 2015)
Hero / Idol
French rally driver Sebastien Loeb. (Athlete, 23 Oct 2015)
Sporting philosophy / motto
"The will allows you to climb to the summit. Without will, you stay at the bottom of the mountain." (Facebook page, 17 Sep 2016)
Awards and honours
He received a special award during the 2019 Sports Trophy Gala of the municipality of Vesoul, France. (estrepublicain.fr, 22 Oct 2019)

The gym in his hometown of Navenne, France, was named after him in recognition of his performance at the 2012 Paralympic Games in London. (franche-comte.france3.fr, 13 Oct 2012; handetvie.fr, 01 Apr 2015)

In 2008, he received the National Order of Merit from the French president. (franche-comte.france3.fr, 13 Oct 2012; handetvie.fr, 01 Apr 2015)
Ambitions
To compete at the 2020 Paralympic Games in Tokyo. (france3-regions.francetvinfo.fr, 07 Jul 2016)
Impairment
He has paraplegia after an artery in his spinal column became blocked at age 14. (lepays.fr, 12 Mar 2012; Athlete, 20 Aug 2018)
Other information
GO-KARTING
He has long been a fan of motorsport and in 2020 competed in his first go-karting competition in a kart that was adapted to suit his impairment. "At the moment, it's mostly a hobby. I've always been passionate about motorsport. It's hard to reconcile the two disciplines [Para athletics and go-karting]. Karting is also very physical. There are the two-speed DD2 models, the K2, with a gearbox. Mine is equipped with a speed dimmer. I do the basics [mechanical repairs] but the big engine revisions are done by a professional. In athletics, I am one of the best in the world. Here I am a nobody." (estrepublicain.fr, 01 Mar 2021)