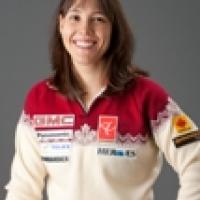 At the 2002 Paralympic Winter Games in Salt Lake City, she became the first Canadian alpine skier to win four medals [two silver and two bronze] at a single edition of the Paralympic Winter Games. (karolinawisniewska.com, 27 Oct 2010)
Other information
COMEBACK AND RETIREMENT
In 2004 she was forced to retire due to a serious concussion, several months after winning the overall world cup title. She came out of retirement in 2007, but after sustaining an injury several years later in February 2011, she announced her retirement from the sport for a second time in May 2012. (karolinawisniewska.com, 27 Oct 2010; canadiansportcentre.com, 14 May 2012)