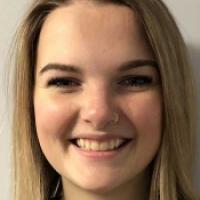 Impairment
She was born without part of her right arm below her elbow. (pressherald.com, 16 Mar 2015; sunjournal.com, 12 Sep 2014)
Other information
OTHER ACTIVITIES
She is mentor for Camp No Limits, which provides camps for children with limb loss and other impairments. She first attended Camp No Limits in 2005 at age six as a camper. She made a brief appearance in the 2014 film 'Dolphin Tale 2'. When visiting an aquarium in Clearwater, FL, United States of America, with Camp No Limits, she put her prosthetic arm in the water, which was touched by Winter, a dolphin with a prosthetic tail. The encounter was captured by a film crew and featured at the end of the film in a segment educating the audience about people with limb deficiencies. "I put my prosthetic arm in the water and the dolphin came up and touched it with her nose. It was so cool. It was like she was giving it a kiss. Usually, when a dolphin loses its tail, it can't survive." (nolimits.elevate.commpartners.com, 01 Jan 2019; sunjournal.com, 12 Sep 2014)