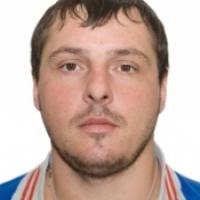 When and where did you begin this sport?
At age five he began playing ice hockey following encouragement from his grandfather. He also played football while growing up. After losing his legs, he took up Para ice hockey in 2011 with the SHC Ugra club in Khanty-Mansiysk, Russian Federation.
Why this sport?
Ivan Tafratov, the coach at Ugra adaptive sport centre, suggested that he try Para ice hockey.
Club / Team
SHC Ugra: Khanty-Mansiysk, RUS
Name of coach
Alexander Zykov [club], RUS; Ruslan Batyrshin [national], RUS
Preferred position / style / stance / technique
Forward

He was named Best Forward at the 2018 International Ugra Cup in Khanty-Mansiysk, Russian Federation. (ugra-news.ru, 12 Nov 2018)

In 2018 he received the title of Honourable Citizen of Khanty-Mansiysk, Russian Federation. (shc-ugra.ru, 08 Jun 2018)

In recognition of his achievements at the 2014 Paralympic Winter Games in Sochi, he was presented with the Order for Merits to the Fatherland [first class] of the Russian Federation. (kremlin.ru, 17 Mar 2014)

In 2014 he received the title of Honoured Master of Sport in the Russian Federation. (minsport.gov.ru, 17 Mar 2014)
Other sports
Prior to his amputation he competed in sambo wrestling for nine years and held the title of Candidate for Master of Sport in the Russian Federation. (csi-ugra.ru, 10 Oct 2012)
Famous relatives
His grandfather held the title of Master of Sport in ice hockey in the Russian Federation. (csi-ugra.ru, 10 Oct 2012)
Impairment
In February 2011 he went to hospital with frostbite on his legs. He almost died and following a month of treatment, doctors decided his legs could not be saved and they were amputated. "Until the last day [before amputation] I walked on my legs. I prepared myself for the operation, how I would live, what to do. I re-read 'Story of a Real Man', and decided that I would stand on prosthetics." (csi-ugra.ru, 10 Oct 2012)
Other information
INSPIRATIONAL BOOK
He is inspired by Boris Polevoy's book 'Story of a Real Man', which is about Soviet fighter pilot Alexey Petrovich Maresyev. Maresyev was shot down in 1942 in Nazi-occupied Russia, but made his way back to Soviet-controlled territory. However, injuries to his legs had become so serious that he had to have them amputated. With the aid of prosthetics, he returned to combat flying. Maresyev died in 2001. (victory-sokolniki.com, 09 Apr 2013)