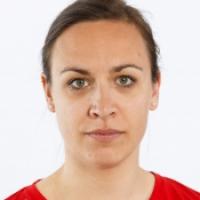 When and where did you begin this sport?
She took up the sport in November 2014 in Odense, Denmark.
Why this sport?
She was introduced to a Para athletics coach at an activities weekend for amputees.
Club / Team
Odense Atletik: Denmark
Name of coach
Anders Dehlholm [national]

Injuries
She suffered from shin splints and knee issues shortly after taking up Para athletics, which motivated her to switch from sprint and jumping events to throwing events. (udlodningsmidlerne.danskespil.dk, 2020)
Sporting philosophy / motto
"Be wise, train hard, stay focused and go for the win." (Athlete, 22 Oct 2015)
Awards and honours
She was the flag bearer for Denmark at the opening ceremony of the 2018 European Championships in Berlin, Germany. (IPC, 20 Aug 2018)
Famous relatives
Her great-grandfather Aage Walther won a silver in artistic gymnastics at the 1920 Olympic Games in Antwerp. (aarhus.lokalavisen.dk, 15 Jul 2016; SportsDeskOnline, 05 Oct 2019)
Impairment
In 2008 her right leg was amputated below the knee after she developed a tumour. "I was just a student when the tumour in my heel was discovered. It was very aggressive and started to eat the bone in my right heel. It was very hard in the end. I had pain throughout my body and could not sleep at night." (aarhus.lokalavisen.dk, 15 Jul 2016; Athlete, 22 Oct 2015)
Other information
OCCUPATION
She works as a communications assistant at Ortos, a medical equipment company based in Odense, Denmark. (LinkedIn profile, 18 Feb 2021; Facebook profile, 18 Aug 2020)

DISCIPLINE SWITCH
Initially a sprinter and long jumper, she switched to discus throw due to problems with her left leg. "I was unfortunately injured. I got shin splints and running knees, which is typical if you just start training hard. I was then forced to take a break, and I was asked if I would try my hand at discus throwing. It is not so hard for the leg, as you do not have to run as much, but 'just' spin around and throw. At first I thought it was intended for people bigger than me, and that it probably wasn't something for me. I decided to give it a try. It turned out that this was what I had dreamed of." (Athlete, 22 Oct 2015; seoghoer.dk, 15 Sep 2016)