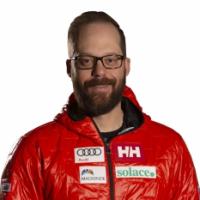 When and where did you begin this sport?
He first tried skiing in 1989 at age five at Rabbit Hill Snow Resort in Edmonton, AB, Canada. He began Para skiing in 2010 at Mission Ridge Winter Park in Fort Qu'Appelle, SK, Canada.
Why this sport?
"It was while watching the 2010 Olympic Winter Games in Vancouver that I realised that I needed to start alpine skiing again."
Club / Team
Regina Alpine Race Team [CAN] / Saskatchewan Alpine Race Team [CAN]:
Name of coach
Jean-Sebastien Labrie [national], CAN
Training Regime
He trains with the national team at the Canadian Sport Institute Pacific campus in Whistler, BC, Canada.

Year
2011
Competing for
Canada
Location
Kimberley, BC, CAN

Nicknames
Oats (IPC, 18 Jan 2018)
Injuries
In January 2022 he sustained injuries including a broken collarbone, five fractures in his ribs, and contusions of his left lung after crashing during his second downhill training run at the 2021 World Championships in Lillehammer, Norway. He was not able to compete at the event. (cbc.ca, 03 Feb 2022)

In March 2016 he broke a bone in his left foot while competing at a test event in the Republic of Korea. (IPC, 18 Jan 2018; Global Regina Facebook page, 08 Nov 2017)
Sporting philosophy / motto
"My paralysis from my original injury is still there, and that's more or less gotten as good as it's going to get, but ski racing has helped me to deal with it, and to accept it and kind of move on. One of the biggest setbacks in my life actually led to one of the biggest accomplishments. If I hadn't broken my back I'd be doing something completely different." (mtroyal.ca, 08 Feb 2018)
Awards and honours
In 2018 he was named Male Athlete of the Year in the Saskatchewan province of Canada. (sasksport.ca, 01 Mar 2021, 28 Mar 2019)
Other sports
He competed in able-bodied skiing prior to his accident. (roosterteeth.com, 12 May 2011)
Impairment
In 2007 he was injured in a fall while on a university field trip studying sedimentary environments in Utah, United States of America. "I fell 12 metres from a rock outcrop, landing on my feet and suffering a radial compression fracture of the T12 vertebra, resulting in an incomplete spinal cord injury." (IPC, 18 Jan 2018; roosterteeth.com, 12 May 2011)
Other information
SKI BACKGROUND AIDS TRANSITION
He says his experience of skiing since childhood made it relatively easy for him to take up sit-skiing after recovering from his accident. "There is a lot of crossover. I started skiing when I was five, racing when I was six, so getting used to the speed was not a factor. When I started on the sit-ski I was always thinking, 'I can go faster than this, I just have to figure out how', and so I was never really scared as far as that goes, which is probably why I like downhill and super G so much. How you move, how you feel in a turn, a good turn versus a bad turn, I knew the difference there. I knew the psychological, mind approach to how to race. I didn't have to learn to do a course inspection or understand the flow of a course. That had all been ingrained in me for 15-plus years beforehand. But your interface with the snow is more mechanical than it is biological. I don't use my knees to ski. I rely on a shock and a spring to interface with the snow. So that's totally different." (mtroyal.ca, 08 Feb 2018)

STUDIES
He spent two years studying geology at Mount Royal College in Calgary, AB, Canada, before moving on to complete his degree at the University of Saskatchewan in Saskatoon, SK, Canada. (mtroyal.ca, 08 Feb 2018; Facebook profile, 24 Nov 2020)