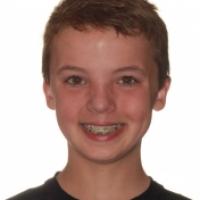 When and where did you begin this sport?
He says he has been swimming his "whole life", and began swimming competitively through the Rockford Riptide club in ninth grade in Rockford, MI, United States of America.
Club / Team
Rockford Riptide [USA] / Rockford High School [USA]:
Name of coach
Mike Cutler [club, school]
Training Regime
He trains 20 hours per week in the pool.

Most influential person in career
Swimming coaches Terri Eudy, Kevin Brown, and Nate Long. (rockfordroar.com, 10 Feb 2019)
Sporting philosophy / motto
"I think anything is possible, and I can do anything as long as I believe." (rockfordroar.com, 10 Feb 2019)
Other sports
He has also competed in archery at the World Dwarf Games, winning medals at the 2013 and 2017 editions, as well as competing at the field archery national championships in the United States of America. (archery360.com, 11 Sep 2014)
Other information
WELL-MANNERED MAN
He has developed a reputation for his manners and gratitude, especially at swim meets where he makes an effort to learn tournament officials and volunteers by name, before giving out hand-written notes to thank them at the end of the meet. His father Aric says people are often surprised by his son's actions. "There is always a look of shock on their faces. They don't expect it. They are working the event because they love it, but it's also nice to be acknowledged for the hard work. It always comes as a surprise. It's a nice way to leave a meet." (rockfordroar.com, 10 Feb 2019)

FROM ARCHERY TO SWIMMING
He won medals in archery at the World Dwarf Games in 2013 at age 10 and again in 2017 at age 14, both times competing against older children and adults. His father Aric said his background in archery helped him transition to swimming. "He [Liam] revels in competition," Aric said. "He loves it. He likes to be focused, and he's very driven to be constantly getting better. Archery is a mental sport, and I think it helped him transition into swimming, which is more physical. I think if your mind is in a competitive mode, your body follows. Liam is able to do that very well. Liam has continually impressed me with all his competitive events, whether it be in archery or swimming. He has a coachable personality." (rockfordroar.com, 10 Feb 2019)