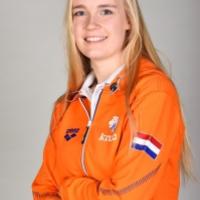 When and where did you begin this sport?
She learned to swim as a child and began competing in 2011. She first competed in Para swimming in 2012 in Eindhoven, Netherlands.
Why this sport?
She tried modern pentathlon when she was younger, and swimming was her strongest discipline. "I signed up for modern pentathlon and I really liked it. But in 2010, the condition of my arm declined really fast. My mum got scared that if I fell from a horse, my wrist would break again. I also struggled with shooting. Because two out of the five sports had become an issue, my mother and I decided it was time for me to do another sport. Swimming was my best event so we signed me up for swimming. I liked it even better."
Club / Team
De Dolfijn: Amsterdam, NED
Name of coach
Sander Nijhuis [national], NED; Bram Dekker [national], NED

Injuries
In January 2015 she contracted pneumonia during a training camp in Hungary and was admitted to hospital in Debrecen, Hungary. She was unable to train for a week. (hetkontaktveluwsnieuwsblad.nl, 02 Feb 2015)
Awards and honours
In 2018 and 2019 she was named Sportswoman of the Year at the Harderwijk Sports Awards in the Netherlands. (lisakruger.nl, 08 Dec 2020; hetkontaktharderwijk.nl, 19 Jan 2019)

She received the 2013 Johan Cruyff Award for her achievements in Dutch national swimming competitions. (woelwaters.nl, 30 Jun 2013)
Other sports
She competed in modern pentathlon and swimming at national youth level in the Netherlands. (TEDx Talks YouTube channel, 21 Nov 2017)
Impairment
In 2006 she broke her left arm after falling off a wall, resulting in a condition known as Madelung's deformity [MD]. Her left arm is seven centimetres shorter than her right arm. She also has 70% less power and impaired range of motion in her left wrist and lower arm. She has a surgery scar on the arm. "The doctors put this device inside my wrist in an attempt to enlarge my bone. Adjusting the device was painful. In the end, the surgery and the device didn't change much to my condition. But this device has been a part of me and it left a huge scar, a scar that I wear with pride every day because it tells my story and made me who I am." (lisakruger.nl, 15 Sep 2019; TEDx Talks YouTube channel, 21 Nov 2017; Instagram profile, 01 Aug 2019)
Other information
JAPANESE TATTOO
In December 2019 she got the Japanese character for 'water' tattooed on the back of her neck. "I decided to get 'water' tattooed on my back in the language of the country that will host the Paralympic Games that initially made me take swimming seriously, and the country I love most - Japan. Because of this element, water, I have a dream, a purpose in life and a hobby that turned into a job. I'm concluding the 2010s with a tattoo that captures the whole decade for me. I started swimming in 2011 and started Para swimming in 2012. Back then my goal was to reach the Tokyo Paralympics, but things went quicker than expected. I started swimming in 2011, became Paralympic champion in 2016, and ended the decade by becoming world champion in 2019. Now I'm ready for the 2020s." (Instagram profile, 24 Dec 2019; Twitter profile, 24 Dec 2019)

HIGH SCHOOL GRADUATION
In mid-2019 she graduated from high school. Her final year had taken her twice as long as the average student due to her swimming commitments. "I'm glad to announce that I graduated from high school. I separated my last year into two years because of my swimming career, and after a successful first year, I can now finally pick up my diploma." (Instagram profile, 04 Jul 2019)

Lisa Kruger: ‘We are incredibly lucky to be back in the pool’