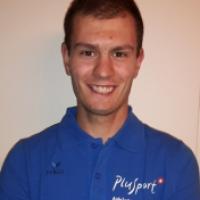 When and where did you begin this sport?
He began the sport in 2010 in Samedan, Switzerland.
Why this sport?
He chose cross-country skiing because he enjoyed being in nature and wanted to stay active during the winter months. "As a little boy I was rather unsporty. In my free time and during my holidays I spent a lot of time on the grandfather's farm, and back then I liked to keep in touch with nature. In high school I was exposed to many sports. I made my way through the extensive physical education classes in middle school. Here I was put on cross-country skis for the first time. In 2010 I decided to do the sport regularly in my free time."

Hobbies
Mountain biking. (arosalenzerheide.swiss, 27 Aug 2019; srf.ch, 25 Aug 2019)
Memorable sporting achievement
Placing 11th in the standing 20km event at the 2017 World Championships in Fintserau, Germany, and finishing in the top 500 at the 2016 Engadin Skimarathon in Switzerland. (Athlete, 05 Mar 2018)
Hero / Idol
Norwegian cross-country skier Petter Northug. (Athlete, 05 Mar 2018)
Sporting philosophy / motto
"Keep moving forward." (engadinerpost.ch, 06 Nov 2012)
Awards and honours
He was named 2018 Para Athlete of the Year of the Grisons Canton in Switzerland. (suedostschweiz.ch, 08 Jun 2018)
Other sports
He has competed in able-bodied mountain biking at national level in Switzerland. (greenhope.ch, 19 Mar 2014; arosalenzerheide.swiss, 27 Aug 2019; srf.ch, 25 Aug 2019)
Ambitions
To compete at the 2022 Paralympic Winter Games in Beijing. (procapgrischun.ch, 01 Aug 2018)
Impairment
He was born without a left hand. (engadinerpost.ch, 06 Nov 2012; Athlete, 05 Mar 2018)
Other information
ILLNESS
He was diagnosed with lymphatic cancer in February 2012. Two days before the diagnosis he took part in a 70-kilometre cross-country mountain bike race. During his chemotherapy he watched a lot of race videos, and two weeks after his last chemotherapy session he took part in a mountain bike race. ''When watching the videos I kept saying to myself that I have to become healthy again and shall fight for it. At my first race I did not go fast, it was all about the experience to compete in a race again.'' (engadinerpost.ch, 06 Nov 2012)