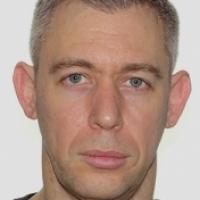 Hobbies
Photography. (Twitter profile, 29 Jun 2020)
Impairment
At age 12 he contracted a brain infection that became progressively worse. Within 18 months he was paralysed from the waist down and unable to speak. At age 16 he was no longer able to control his body and lost his senses. Over the next three years, he gradually regained his senses, and by age 19 he was fully aware but unable to communicate. At age 25, a caregiver realised that Pistorius was physically reacting to questions and statements. Through physical therapy he regained some control of his head and arms, and he began communicating through a voice synthesiser. (comedy.com, 13 Jan 2020; treehugger.com, 17 Sep 2019; martinpistorius.com, 01 Jan 2013)
Other information
BOOK
His autobiography, 'Ghost Boy', was published in 2011 and appeared on the New York Times best-sellers list. He co-authored the book with Megan Lloyd Davies, and it is about the experiences of his illness. "My mind was trapped inside a useless body, my arms and legs weren't mine to control and my voice was mute, I couldn't make a sign or sounds to let anyone know I'd become aware again. I was invisible, the ghost boy." (treehugger.com, 17 Sep 2019; martinpistorius.com, 01 Jan 2013)