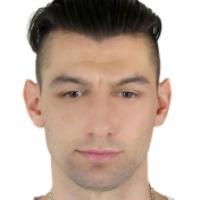 When and where did you begin this sport?
He took up the sport at age 16 in Poznan, Poland, but did not start training seriously until age 19.
Why this sport?
He was bored after class and decided to join his school's athletics team. "I regret taking the sport up so late. Also, I did not take it seriously for the first three years, so I basically started training at age 19."
Club / Team
START Gorzow Wielkopolski: Poland
Name of coach
Tadeusz Cuch [club], POL; Zbigniew Lewkowicz [club], POL

Six weeks before the 2008 Paralympic Games in Beijing he tore his biceps femoris. He was able to compete in Beijing, but he could not train properly, which affected his performance at the Games. (onet.pl, 21 May 2015)
Awards and honours
He was named the 2013 Para Athlete of the Year in Poland. (naszemiasto.pl, 13 Jan 2014)

In 2013 he received the Gold Cross of Merit from the president of Poland. (mygorzow.pl, 08 Feb 2013)
Ambitions
To win a medal at the 2020 Paralympic Games in Tokyo. He also aspires to open a massage parlour in Wrzesnia, Poland. (MrMichalPol YouTube channel, 23 Aug 2018)
Impairment
At age seven he was diagnosed with Stargardt's disease, and gradually lost most of his sight. He retains about 10% vision. (onet.pl, 21 May 2015)
Other information
MOVE TO WARSAW
At the beginning of 2017 he relocated from his hometown of Wrzesnia, Poland to Warsaw, Poland to train under the guidance of Tadeusz Cuch in preparation for the 2020 Paralympic Games in Tokyo. "He is not only my coach, but also my friend, we talk a lot not only about sport, but also about life. He pays a lot of attention to running technique. He is very pedantic, so we improve every small detail. Only for him I decided to move to Warsaw and I don't regret this decision. At the beginning, I was scared before moving to such a big city, I was worried if I'd be able to live there, but I soon got used to the city." (MrMichalPol YouTube channel, 23 Aug 2018)

LAST MISSION
He announced that the 2020 Paralympic Games in Tokyo, will be the last event in his athletics career. "After Tokyo, I will come back to Wrzesnia and I will start my own business, a massage parlour and start family life. I still want to have sport in my life, so maybe I will do CrossFit." (parasportowcy.pl, 18 Jan 2019)

RUNNING WITHOUT GUIDE
In his impairment category T12 he is allowed to have a guide, however has never used this method. "I have never considered running with a guide, because he would disturb rather me than help." (parasportowcy.pl, 18 Jan 2019)