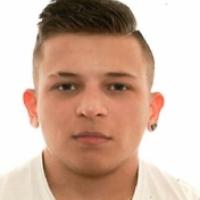 When and where did you begin this sport?
He took up the sport in 2014 at the AK Odisej club in Kutina, Croatia.
Why this sport?
He had trained at a gym for about three years and eventually a friend there suggested he join a training session at the athletics club AK Odisej. "I went along spontaneously to see what the training looked like. I took a shot put and threw it, and the coaches noticed potential in me. I liked it, so I started to join their training sessions."
Club / Team
AK Odisej : Kutina, CRO
Name of coach
Dubravko Brdovcak [personal], CRO; Mihovil Rendulic [club], CRO

Memorable sporting achievement
Claiming bronze in F40 shot put at the 2019 World Championships in Dubai, United Arab Emirates, and winning gold in the F40 shot put at the 2018 European Championships in Berlin, Germany. (SN tv Sport nedjeljom YouTube channel, 24 Apr 2020)
Most influential person in career
His family. (dnevnik.hr, 03 Feb 2021)
Injuries
His performance at the 2016 Paralympic Games in Rio de Janeiro was hampered due to an injury he sustained one week before the Games. (paralympic.org, 24 Jan 2019)

As of 2020 he has undergone more than 15 surgeries, including procedures to his hips, joints and ankles due to genetic malformations of his bones. (hpo.hr, 10 Mar 2020; dnevnik.hr, 26 Nov 2017; 26 May 2018)
Sporting philosophy / motto
"Difficult roads often lead to beautiful destinations." (Instagram profile, 01 Jan 2021)
Awards and honours
He was named 2018 Para Athlete of the Year by the Croatian Para Athletics Federation. (vecernji.hr, 29 Jan 2019)

He was named the 2016 Para Athlete of the Year in Kutina, Croatia. (dunja.in, 14 Mar 2017)
Ambitions
To win a gold medal at the 2020 Paralympic Games in Tokyo. (dnevnik.hr, 03 Feb 2021)
Impairment
He is a person of short stature. (24sata.hr, 16 Dec 2015)
Other information
MEDAL MOTIVATION
He said finishing fourth and missing out on a medal by one centimetre at the 2017 World Championships in London, England, was his motivation when he won bronze at the 2019 World Championships in Dubai, United Arab Emirates. "That one centimetre meant a lot. Though it was a world-class event and featured top athletes, it was a great lesson that I was determined to learn from and not repeat. It made me stronger, as it was huge motivation. In Dubai, I managed to achieve my goal and win the medal at the world championships, it's my most memorable achievement so far. Since I took up the sport I trained for that moment, to be among the best in the world." (SN tv Sport nedjeljom YouTube channel, 24 Apr 2020)