While others may be in awe watching the USA’s Matt Stutzman shoot a bow and arrow, or even drive a car, with his feet, Stutzman finds it no different. The Armless Archer has been redefining norms since he was born. He jumped into the international spotlight taking silver at the London 2012 Paralympics. The spotlight got brighter as he starred in the Netflix documentary 'Rising Phoenix' released on August 2020.

Heading into his third Paralympic Games at Tokyo 2020, the father of three is hoping to move one step up from the silver result he got in the men’s individual compound at the 2012 Paralympics. He won silver at the 2015 Para Pan American Games, then went on to win a team gold medal at the 2015 World Archery Para Championships later that month.

On 9 December 2015, just one day before his 33rd birthday, Stutzman hit a target from 310 yards, breaking the longest Guinness-ratified distance by any athlete or individual in the world. He also clinched bronze at the 2019 World Archery Para Championships, among other honours.

But his results at the Rio 2016 Paralympics is what stings; he fell one point short of making it out of the elimination round of the men’s individual compound open.

It was at those Games where the hype was high. He was named as one of BP Team USA athlete ambassadors for Rio 2016, and became one of the world’s biggest inspirations, as photos of him shooting a bow and arrow without arms were some of the most iconic of the Games.

Born without arms and adopted at four months old, Stutzman grew up in a family of hunters in Iowa, and he had always wanted to be like his father and brother.

“They couldn’t hit nothing,” Stutzman said. “But when you’re little, you want to act like your dad or mimic what he does, so he helped me purchase my first bow. I was 16 at the time.”

That bow was stolen from Stutzman the next year, and it was not until 2008 that he purchased another when he needed something to do during the winter months.

Every day from then on, he practiced.

He set the bow on his right shoulder with its standard-issued mechanical release aid.

He drew it back, the trigger just underneath his jaw bone.

Then, moving his jaw slightly backwards, using about as much pressure as it takes to click a computer mouse, he released the bow.

Bullseye. It was history since. 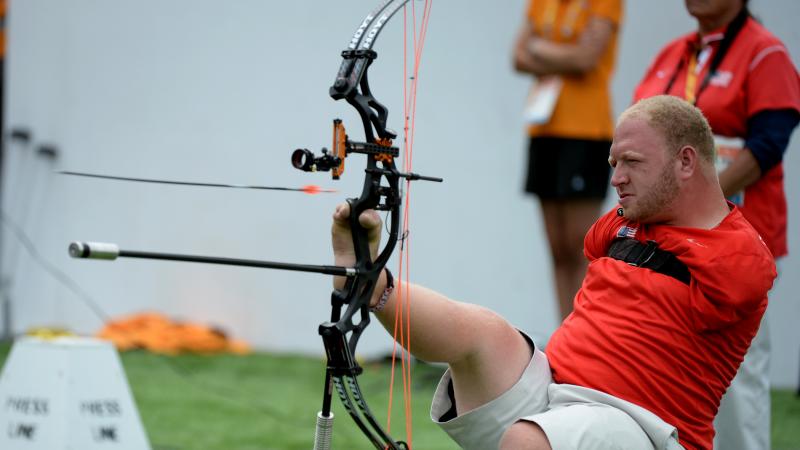