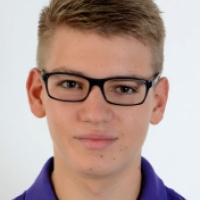 When and where did you begin this sport?
He first tried skiing at age four.
Why this sport?
His parents introduced him to the sport. "We like to ski ourselves and at the age of four, we put him on skis for the first time. Someone had said it would not work but he took it further. In 2013 he won the Bavarian Para Ski Championships in slalom and finished second in the giant slalom," his father Thomas said.

In 2015 he received a Motivation Award from the German Stroke Help Foundation. (presseportal.de, 02 Feb 2015)
Other sports
He represented Germany in Para cycling at the 2018 European Cup event in Prague, Czech Republic. He has also competed in Para canoe sprint at club level in Germany. (caths.cz, 21 Sep 2018; infranken.de, 13 Sep 2016; bvs-bayern.com, 04 Mar 2016)
Ambitions
To compete in canoe sprint at the 2020 Paralympic Games in Tokyo, and in alpine skiing at the 2022 Paralympic Winter Games in Beijing. (infranken.de, 13 Sep 2016; mainpost.de, 04 Jan 2015)
Impairment
He was born with hemiparesis of the left side of his body, having had a stroke prior to birth. (infranken.de, 13 Sep 2016)
Other information
SPORTS ENTHUSIAST
In addition to skiing, he has competed in canoe sprint and cycling. He also enjoys rock climbing as a hobby. "Kayaking is mainly a good balance in the summer for the core muscles. Climbing is also good because it strengthens more of my muscles. I am still young. I'm already ambitious and I want to win. I train consistently so that I can compete in 2022 [Paralympic Winter Games in Beijing]." (maxi-jaeger.de, 10 Oct 2018; alpenverein.de, 07 Aug 2014)