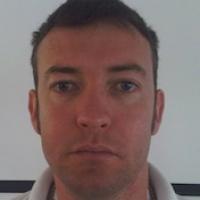 When and where did you begin this sport?
He first tried the sport in March 2008.
Why this sport?
He was introduced to the sport through the 'Battle Back' initiative for injured ex-service personnel. "I fell in love with skiing straight away. The excitement of rushing down the mountain in the fresh air with great scenery gave me an incredible buzz. I've got something I am going to dedicate the next five years of my life to."
Club / Team
Combined Services Disabled Ski Team [CSDST]: Great Britain
Name of coach
Mark Scorgie [club]; Duncan Freshwater [national], GBR

In late February 2013 he broke his sternum and was unable to ski until July 2013. (bbc.co.uk, 21 Jan 2014)
Impairment
In November 2004 while serving in Iraq with the British Army, he lost both legs and sustained a brain injury in a suicide bomb attack. (salisburyjournal.co.uk, 13 Mar 2012)
Other information
FORCES FIRST
He became the first ex-serviceman to be chosen to represent Great Britain at a Paralympic Winter Games when he was selected for the 2014 Games in Sochi. (radiotimes.com, 07 Mar 2014)

SCARY SLOPES
He withdrew from the downhill competition at the 2014 Paralympic Winter Games in Sochi before the event began due to concerns about the course. "I was skiing at about 50-60% and was still feeling a little bit scared. It was very tricky, so I took a decision and just pulled myself from the race. I still had another four [events] to come." (bbc.co.uk, 05 Mar 2014)

TOUGH TIMES
He went through a difficult period during his recovery. "I wish it had been plain sailing since [2010], but it wasn't. I went through a painful divorce. My wife and I both loved each other, but my brain damage led to anger management issues. It was just too much. I was chucked off the ski team for a time for threatening to beat up the military coach, not the best idea. That was around the same time as I was discharged from the army. It felt as if a lot of people had turned their backs on me when I needed them most. In retrospect, I was just being stubborn. I bit the bullet, said sorry, and started getting my life back together." (radiotimes.com, 07 Mar 2014)

INJURY COMPENSATION
He does not qualify for the Armed Forces Compensation Scheme in Great Britain because his injuries happened in 2004, nine months before the start date of the scheme in April 2005. "Blokes injured nine months after me bought houses for cash and live a more comfortable life with adapted cars and holidays. I don't begrudge them any of it. But it simply isn't fair." (mirror.co.uk, 26 Jan 2013)