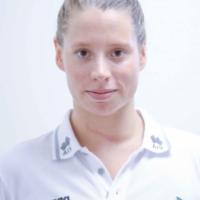 When and where did you begin this sport?
She grew up competing in swimming at school. She began Para swimming training five months after her accident at the Melbourne Vicentre Swimming Club in Victoria, Australia, and began competing in 2015.
Why this sport?
"Being a swimmer before the accident, a lot of people would make comments about how I could be a Paralympian down the road and I always shot them down because I had no interest in it. I was very used to setting goals and doing what I had to achieve them. That came out as soon as I had a physio come in. The goals slowly got bigger, from being able to sit on the edge of the bed, to be able to stand, to be able to walk and then to be able to swim. Part of me knew that if I was going to start getting back in the water it would probably end up there [competitive swimming]."
Club / Team
Rackley Swim Team: Australia
Name of coach
Tracey Menzies-Stegbauer

Nicknames
Mermon [she trains with a prosthetic mermaid tail she attaches to her right leg]. (abc.net.au, 01 Sep 2016)
Hero / Idol
US Para snowboarder Amy Purdy, Australian swimmer Petria Thomas. (paralympic.org.au, 2016)
Sporting philosophy / motto
"Training without my leg was different than when I was an able-bodied swimmer. I had to train harder, longer and smarter than before. Para sport is in no way easier than being an able-bodied athlete. At an elite level, I still had to be determined and disciplined every day. I have the added challenge of having to be inventive. Learning how to push off the wall with only one leg was just one challenge." (news.com.au, 09 Oct 2018)
Awards and honours
She was named 2016 Female Athlete of the Year by RMIT University in Melbourne, VIC, Australia. She shared the award with Australian Para swimmer Ashleigh McConnell. (rmit.edu.au, 30 Nov 2016)

She received the President's Trophy at the 2016 Swimming Victoria Awards in Australia. (vic.swimming.org.au, 2016)
Ambitions
To compete at the 2020 Paralympic Games in Tokyo. (moniquemermaidmurphy.com, Apr 2017)
Impairment
In 2014 she was at a party when she fell 20 metres from a fifth floor balcony and landed on a glass roof, suffering multiple broken bones and lacerations. During her recovery she met Australian motivational speaker Mike Rolls, who helped her make the decision to amputate her lower right leg. "[Rolls] gave me a realistic understanding of what my life would be like with a prostheses. He had once faced a similar decision regarding an elective amputation, and talking to him helped my family and I decide that I would undergo further surgery to remove much of the lower part of my right leg." (news.com.au, 09 Oct 2018; moniquemermaidmurphy.com, Nov 2016; paralympic.org.au, Sep 2016; smh.com.au, 26 Jun 2016; sbs.com.au, 18 Jun 2016)
Other information
ENDOMETRIOSIS
After her 2014 accident she was left with undiagnosed endometriosis. "When I had my first period after the accident, it was absolutely horrific. It was like all the periods I'd missed were just all coming together with one big punch, and all the doctors at that time were telling me that was completely normal and my body had been through trauma, and it was just recovering and it was going to be an up-and-down journey." She received her diagnosis after five years of pain and underwent surgery. "It wasn't in my head, it was something in there, there was something that was wrong. And it's not because I'm not strong enough, and it's not because I don't have the ability to put things aside and race hard when it counts. There was something that my body was doing that wasn't right that needed to be addressed and that's ok." (abc.net.au, 08 May 2020)

OTHER ACTIVITIES
In 2019 she was selected to be a part of a partnership programme run by the Australian Institute of Sport [AIS] and mental health charity Lifeline Australia. The programme, called Lifeline Community Custodians, sees elite athletes advocate the mental health benefits of sport in Australian communities. She has also served as an ambassador for the Australian period poverty charity, 'Share the Dignity'. (Facebook page, 07 Jan 2021; sportaus.gov.au, 10 Apr 2019)