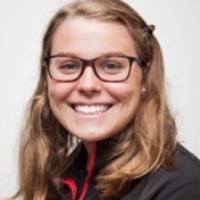 When and where did you begin this sport?
She began swimming competitively at age ten. Following her injury in 2013 she continued swimming on and off for a few years, but had to stop completely in 2016 due to her foot. She was back in the pool weeks after her amputation in 2018, which was her first time back in a pool in almost two years.
Why this sport?
"I was an elite athlete, and when I was 14 years old I was top 20 in the country in the mile. So, I loved swimming, it was a huge part of my life, and unfortunately I had an injury. We did surgery after surgery, and there was nothing they could do. They told me the only thing they could do is amputate my leg. So we did that and as a family we decided to move forward. I got back into swimming, I got into Para swimming."
Club / Team
TAC Titans: Cary, NC, USA
Name of coach
John Payne [club]

Most influential person in career
Her parents. (medium.com, 15 Sep 2020)
Hero / Idol
US swimmers Michael Phelps and Katie Ledecky. (TheEllenShow YouTube channel, 29 Sep 2021; medium.com, 15 Sep 2020)
Injuries
In November 2021 she underwent an emergency surgery to treat an infection. (Instagram profile, 18 Nov 2021)
Sporting philosophy / motto
"Strength grows in the moments when you think you can't go on, but you keep going anyway." (medium.com, 15 Sep 2020)
Other sports
As an able-bodied swimmer she was ranked in the top 20 nationally for the 1500m at age 15 and dreamt of swimming at the Olympic Games, until she broke the bones in her left foot that would ultimately lead to its amputation. (nytimes.com, 03 Mar 2019)
Ambitions
To compete at the 2024 Paralympic Games in Paris. (TheEllenShow YouTube channel, 29 Sep 2021)
Impairment
She broke the sesamoid bones, two jelly bean-size bones under her left big toe, before a swimming race in 2013. The seemingly minor injury resulted in constant, debilitating pain that four surgeries and numerous doctors were unable to resolve over the next five years. A staph infection and the prospect of long-term painkiller addiction led her to elect to have her lower leg amputated in May 2018. In October 2019 she had her right leg amputated after an injury to her right foot led to her being diagnosed with a rare vascular disorder, cutting off the blood supply to her foot. (boston.com, 30 Jun 2021; nytimes.com, 03 Mar 2019)
Other information
OPTING FOR AMPUTATION
Numerous surgeries and doctors were unable to treat the excruciating pain she suffered in the five years after her 2013 injury, and she became dependent on a variety of painkillers. She continued swimming despite the pain, and won a scholarship to Biola University near Los Angeles, but the painkillers were impacting her ability to study and her father said the family felt they were "losing her" to the drugs. "I went to class high. There were times I took so many pills and I was scared that I had overdosed. Opioid addiction is an epidemic. I didn't want that to become my life." In 2017 a staph infection surfaced in her injured foot, and she opted for amputation. In October 2019 she had a second amputation, this time on her right leg due to a rare vascular disorder. "The unimaginable happened again. I began to feel the same, familiar pain in my right foot. I was terrified. Following an angiogram, my doctors determined that there was a never-seen-before lack of blood flow from mid-calf down to my foot. Essentially, my foot was dying and there was no explanation. My only option was to undergo another below-the-knee amputation making me a bilateral amputee. Losing my first leg was difficult, but it will never compare to the loss of my second leg. When it was time to lose my first leg, I almost felt ready as I had suffered for the six years prior. I was no longer able to walk, bare weight, or even move the foot. But when I learned about my right leg I was physically and emotionally destroyed. It felt as though my life just came crashing down and I wouldn't ever be able to re-build it. Although I felt hopeless and lost, I made a promise to myself that I would get through it, remain positive, and make the most of my situation." (massgeneralbrigham.org, 18 Nov 2021; TheEllenShow YouTube channel, 29 Sep 2021; boston.com, 30 Jun 2021; medium.com, 15 Sep 2020; nytimes.com, 03 Mar 2019; swimswam.com, 16 Oct 2018)

OTHER STUDIES
She has studied pre-medicine at Biola University in La Mirada, CA, United States of America. (medium.com, 15 Sep 2020)