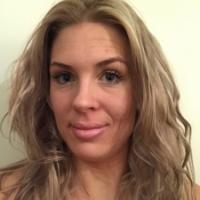 Why this sport?
Her father got her involved in the sport.
Club / Team
Ahus Friidott: Sweden
Name of coach
Magnus Olsson [national], SWE

Hero / Idol
Swedish heptathlete Carolina Kluft. (aftonbladet.se, 11 Sep 2008)
Injuries
She suffered a knee injury while competing at the 2008 Paralympic Games in Beijing. (sverigesradio.se, 03 May 2011)
Impairment
She was diagnosed with a visual condition named Stargardt's disease at age eight. (lvi.se, 08 Dec 2017)
Other information
COMPETITIVE BREAK
She took a long break from competition after the 2008 Paralympic Games in Beijing. She competed in occasional races but began to focus on the sport seriously again in 2015. "I needed time to find myself. I did not think I would return to athletics, but now I think I will enjoy racing much more." (nsk.se, 16 Mar 2017)