The Africa Oceania Goalball Regional Championships will begin Tuesday (15 November) at the Sydney Olympic Park Sports Centre in Australia and will last for three days.

Both the men’s and women’s winners of the competition will qualify for the London 2012 Paralympic Games.

None of the teams qualified for the Beijing 2008 Paralympic Games, so they will all be hungry to earn a spot at London 2012. 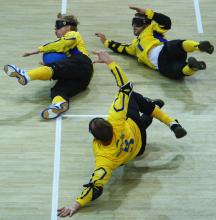