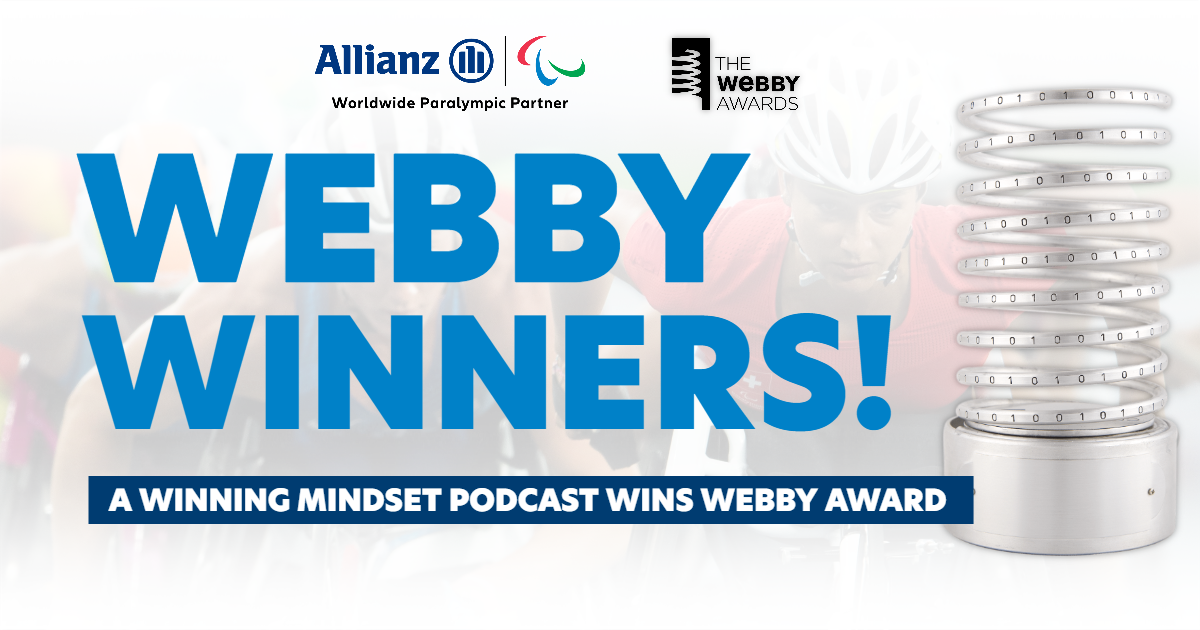 The International Paralympic Committee (IPC) and Allianz’s official podcast ‘A Winning Mindset: Lessons From The Paralympics’ won a prestigious Webby Award on Tuesday (18 May), recognised as the winner in the Best Branded Podcast or Segment category.

‘A Winning Mindset’ took the accolade in the Best Branded Podcast or Segment category at the Webby Awards from a shortlist which also included notable global organisations including Headspace.

Produced in collaboration with Livewire Sport and launched in August 2020, A Winning Mindset featured 20 episodes, with each episode digging deeper than the Paralympian’s on-field accomplishments with athletes sharing experiences that can benefit the audience’s everyday life, such as self-acceptance, mental health and body image.

Natalia Dannenberg-Spreier, IPC Head of Brand and Engagement, said: “We are delighted to accept this award on behalf of the International Paralympic Committee, Allianz, Livewire Sport and show host Andy Stevenson. Huge thank you to the Para athletes and special guests.

“Their stories of defiance, leadership and self-acceptance motivated and provided life lessons to our listeners. In a year where the global pandemic has disproportionately affected the world’s 15 per cent who have a disability, it was important for the voices of the world’s largest marginalised group to be heard, to initiate change towards a society more inclusive of persons with disabilities.”

Eike Bürgel, Global Head of Olympic and Paralympic Program Management at Allianz, added: “Thank you to every athlete for continuing to challenge, connect with and give confidence to each of us through your stories. This award belongs to you – and Allianz remains committed to getting behind you and the wider Paralympic Movement for what’s ahead.”

Following the exciting news of winning a Webby Award, the IPC and Allianz can also confirm that a second series of A Winning Mindset will launch later this year, focusing on 20 new athletes who provide wisdom and motivation through their sporting and personal achievements.

The Webby Awards are a leading international award honouring excellence on the Internet, considered by The New York Times as "Internet's highest honour." It is presented annually by the International Academy of Digital Arts and Sciences (IADAS), a judging body composed of over 2,000 members including leading Internet experts, business figures, luminaries, visionaries, and creative celebrities.

Greek boccia player Greg Polychronidis said: “Winning the Webby award is a major achievement and I really feel proud that I've been a member of the IPC & Allianz chosen athletes that shared their story in order to inspire, as well let people know the insights of the Paralympians path.

“Personally, I shared a setback that made me stronger afterwards and led me to great sports achievements. Allianz is not only my sponsor, but also a company that is truly interested in all I do and always is next to me in order to win competitions.”

In addition to Greg’s story, all 20 episodes delved into personal stories and explored how they have used the support of others to achieve their goals in and away from sport.

Australian goalball player Meica Horsburgh talked mental health and explained how she recovered from a dark moment in life, while French wheelchair basketball player Grace Wembolua boldly described her journey from surviving an arson attack to becoming a body-image influencer.

Among other guests were Paralympic champions Sherif Osman of Egypt and Bebe Vio of Italy; and Breaking Bad TV series star RJ Mitte.