Paralympics Ireland to host event in country for only second time. 04 Oct 2013
Imagen 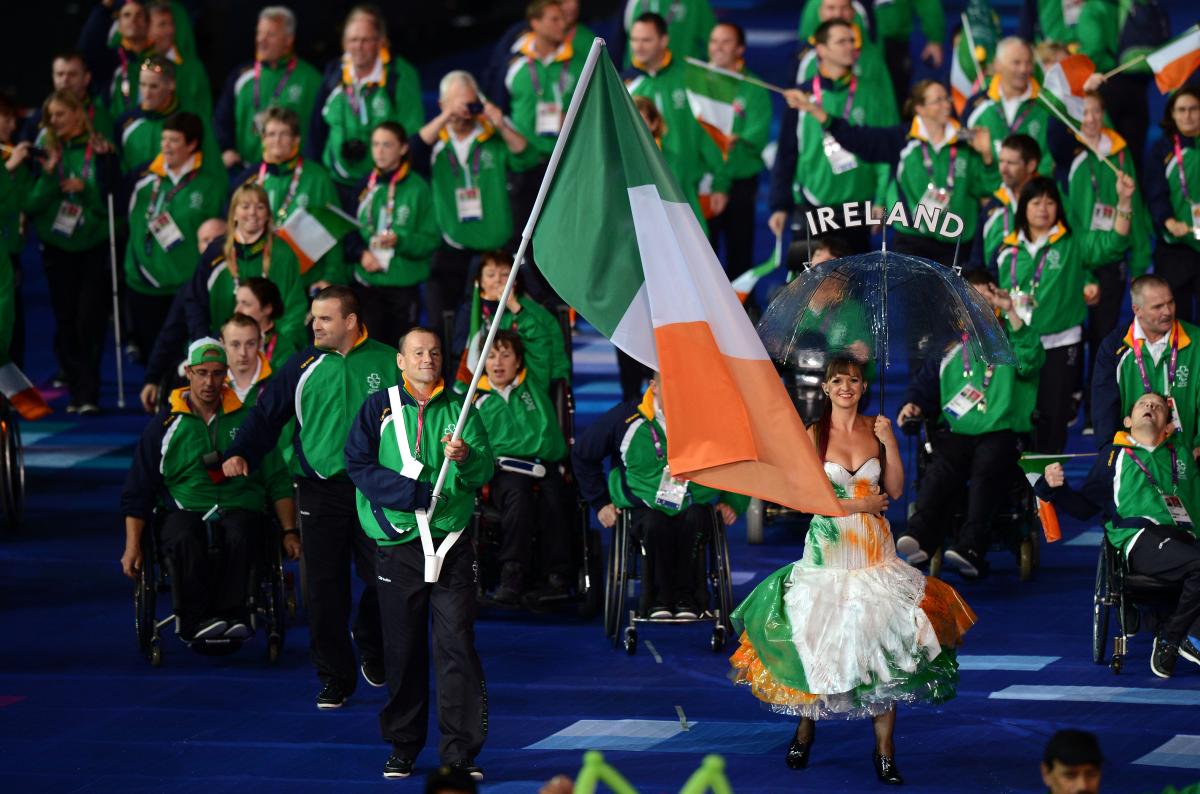 Cyclist Cathal Miller carries Ireland's flag into the Olympic Stadium during the Opening Ceremony of the London 2012 Parlaympic Games.

“A General Assembly and Conference is an important event for all of us. For the EPC executive board, it is important to have feedback on the activities done in the previous two years and to have support for the future direction of EPC and its activities."

Paralympics Ireland is hosting the 10th European Paralympic Committee (EPC) General Assembly and Conference in Dublin this weekend (4 and 5 October).

The hosts are promoting this major international event as their contribution to The Gathering but outside of the opportunities available to show off a little bit of Ireland and the famous Irish hospitality, this is a very important weekend for the Paralympic Movement.

A biennial affair that is being held in this country for only the second time – it took place in Malahide 12 years ago - the EPC General Assembly and Conference will bring more than 100 delegates from over 40 countries to the Crowne Plaza Hotel, Northwood.

A lot of key issues surrounding the Paralympic sport are sure to be debated in the coming days.

Friday’s conference programme will focus on policy, development, co-operation, gender equality and the continuing encouragement of youth participation, with contributions from many important stakeholders.

It will also see the EPC and the European Olympic Committee jointly signing a Memorandum of Understanding. This will represent a ground-breaking formal commitment from the two organisations that they will work together for the development of sport in Europe, particularly at youth level.

The EOC will be represented by their President, Pat Hickey. Mr Hickey will be joined by a host of other dignitaries, including EPC President John Petersson, IPC President Sir Philip Craven, Paralympics Ireland President James Gradwell, and CEO of the Irish Sports Council, John Treacy.

Three deserving individuals will receive this award before a further trio of Paralympic legends will be inducted into the Paralympics Ireland Hall of Fame.

On Saturday, the General Assembly will hear reports on finances and budgets, while there will also be reports on the organisation of upcoming major events including the Sochi 2014 Paralympic Winter Games and the Rio 2016 Paralympics.

EPC President, John Petersson will be returned unopposed on Saturday and he is looking forward to a progressive and fruitful weekend in Dublin.

“A General Assembly and Conference is an important event for all of us. For the EPC executive board, it is important to have feedback on the activities done in the previous two years and to have support for the future direction of EPC and its activities.

“For the members it is crucial to discuss, evaluate, inspire and get experiences from others and use the time to share knowledge and enjoy the time together with members from the Paralympic family.

“I know that everybody within EPC together with our friends in Paralympics Ireland have worked hard to make the 10th EPC General Assembly and Conference the best ever. In this regard, I express my deep and grateful thanks to Paralympics Ireland for hosting this important event for EPC.”

“As one of the few NPCs to have participated in every Summer Paralympic Games, we were particularly delighted to see the enormous growth of the Paralympic Movement since those humble beginnings in 1960, to the incredible success of the London 2012 Games.

“London 2012 was our greatest ever performance and we look forward to continuing to develop and nurture our wonderful movement with our colleagues in Europe and around the world.

Paralympics Ireland CEO, Liam Harbison believes that the Paralympic movement must continue to build on the giant strides made in recent years.

"Paralympics Ireland are proud to host our European colleagues over the coming days and pleased to play our part in 'The Gathering'. London was a huge success for Paralympic sport globally but the nations need to continue working to ensure that re success in London is sustained and the movement reaches new heights at future Games.

“Discussions in Dublin this week and at the IPC General Assembly in Athens in November will play a key role in shaping and sustaining that success.”

Minister for Transport, Tourism and Sport, Leo Varadkar welcomes the international visitors to the Irish capital this weekend and believes that it is a fitting venue for the EPC General Assembly and Conference.

“Ireland has a proud tradition in Paralympic sport and the Irish Paralympic team was magnificent in London, taking home a total of 16 medals including eight gold, three silver and five bronze medals. The Games have a very special place in the hearts of the Irish people and its many highlights will live forever in the memory.”