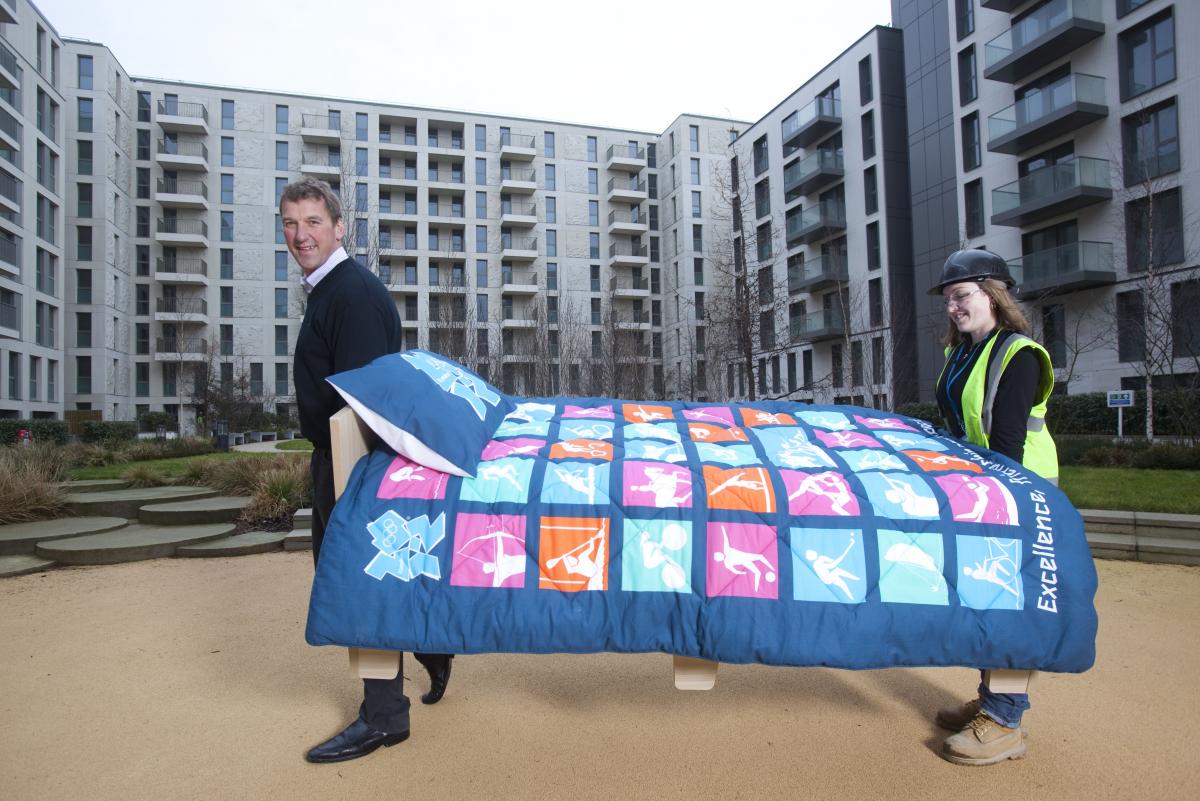 Olympian Matthew Pinsent helps lift in the first of 16,000 beds to be installed in Village as the ODA completes construction of apartments.

The handover of the Village marks the start of the huge process to fit-out the new apartments and village site to be ready to welcome athletes and officials from around the world for the Olympic and Paralympic Games.

Four-time Olympic gold medallist Matthew Pinsent was on-hand to help start LOCOG’s “bedding in” process, helping lift in the first of more than 16,000 beds to be installed in the Village in the coming months.

The village will be able to house up to 16,000 thousand athletes and team officials during the Olympic Games, and 6,200 thousand athletes and team officials plus 1,000 referees and umpires during the Paralympic Games, all from 200 countries around the world. The fit-out and overlay work now underway to get the Village ready for the Games includes:

• Equipping each apartment with a television and wi-fi services.

• Constructing the temporary 24-hour main dining facility with 5,000 seats, as well the Village Plaza Café and ‘Grab-and-go’ carts – the Village will provide the largest peacetime catering operation in the world with up to 60,000 meals served daily.

• Sustainably sourced food from around the world will be available including 25,000 loaves of bread, 232 tons of potatoes, 75,000 litres of milk and more than 330 tons of fruit and vegetables.

• Constructing the Welcome Centre, the initial arrival point for athletes and officials to be officially accredited for the London 2012 Games.

The ODA started work on the Village in June 2008 and has now completed the construction of 2,818 new apartments on time.

“Athletes are at the heart of the London 2012 Games and our plans for the Olympic Village will provide them with a home-from-home as they prepare for one of the biggest sporting moments of their lives,” LOCOG chair Seb Coe said. “With the Village now handed over we are starting the huge process to install essential facilities and services ready to welcome competitors from around the world in six months’ time.”

After the Games, the Village will create a legacy of 2,818 new homes across 11 individually designed plots in a new community to be known as East Village. This will offer the best of city living in one place as high-quality homes – affordable and private rented or owned - are matched with newly created parklands, public squares and some of the best transport connections in the capital.

A total of 4,200 athletes from 160 countries will compete at the London 2012 Paralympic Games.