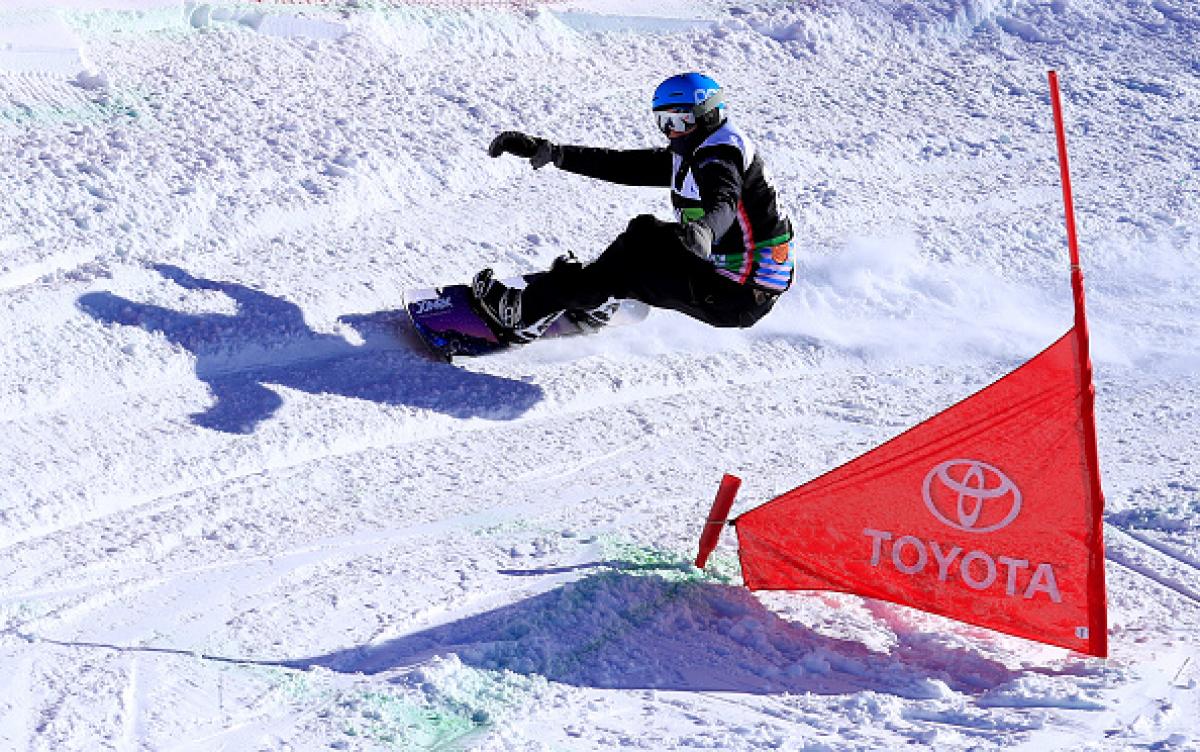 LANDGRAAF: The World Para Snowboard World Cup season started off in grand style for USA’s Zach Miller who marked the occasion with his first-ever victory at the competition in a dramatic race at Snow World Landgraaf.

The Dutch indoor ski resort is hosting two banked slalom races to start of the 2019-20 season with the final races to follow on November 14.

Miller did not look like he would not be a threat in the men’s LL2 race after he failed to finish his first run, but never to be discounted, the spunky 20-year-old blazed to the finish in a time of 45.40 seconds on his second try, inching Great Britain’s Owen Pick just 0.09 off the top spot.

“It took a long time and it’s been a long journey. I’ve been on the World Cup circuit since 2013 so to be able to really put the fastest time down today and get a gold medal, it feels incredible,” said Miller. “It feels like all the hard work over the years has really paid off.”

Miller, who is putting an emphasis on mental preparation this season, spent the morning of the race visualising a good performance and calling his friends and family. He said this was one of the keys to clinching victory in the competitive men’s LL2 field that saw 22 riders at the starting gates in Landgraaf.

“I heard some really encouraging words this morning that put me in a great mood,” Miller said. “Just having that confidence boost from back home, knowing that I got a lot of people cheering me on, really helped give me a positive attitude and a determination to put down the fastest time.

“I already called my friends and family back home. They all know. They’ve been staying up all night waiting for the times to come through so now is the time to really celebrate.”

China’s Xu Xiang was third in this race of margins, which also saw Paralympic champion and first run leader Matti Suur-Hamari of Finland lose out on the podium by a mere 0.01 seconds.

Miller was not the only US rider to top the podium in Landgraaf. His team-mate Mike Minor also took gold in the men’s UL after leading both runs with a comfortable two-second margin to finish ahead of Italy’s Jacopo Luchini and China’s Jiang Zihao.

“Ride fast, take chances,” Minor said of his secret to fast riding. “I just like to go as fast as I possibly can on a snowboard, as fast as humanly possible.”

After finishing the first race in 44.01 seconds, Minor is now aiming to go under the 44-second mark in the second race on Thursday and is counting on his creative summer training to give him an extra boost.

The banked slalom champion at the 2018 Paralympic Winter Games put in countless hours in the skate park this summer and even competed in the adaptive skateboarding competition at the X-Games in Minneapolis, USA.

“I spent my entire summer skateboarding, from sun dawn to sun down. It was like I was 16 years old again,” Minor said. “They transfer right over. Skateboarding is primarily the best cross-training for snowboarding.”

Dutch duo, Lisa Bunschoten and Chris Vos, were golden in the women’s LL2 and men’s LL1 races, respectively, using the home advantage to the max.

Bunschoten led both of her runs to finish with a time of 50.56, ahead of Canada’s Sandrine Hamel and team-mate Renske van Beek.

“It was a super good race,” Bunschoten said. “I wanted to go under the 50 seconds but that didn’t work out, so hopefully tomorrow.”

Vos had a more challenging time as he had to fight his way up from fourth place after the first run while also getting used to his new leg suspension. In the end, he managed to improve his time by an impressive 11.02 seconds and surpass Norway’s Kristian Moen and China’s Liu Kaiyang.

“It’s really nice to win the first World Cup. I have a new leg so that’s really different,” Vos said. “I had a little bit of problems today with the suspension because I was leaking air so in the course my air pressure was half the volume when I was down.”

China swept the podium in the women’s UL with the four Chinese riders taking the top four spots. Pang Qiaorong led the charge, followed by silver medallist Lu Jiangli and bronze medallist Lu Mingyi with only a few seconds separating all of them.

Cecile Hernandez won gold in the women’s LL1 ahead of China’s Liu Yunhai, who failed to finish her second run and trailed more than 30 seconds behind.

The riders will have another opportunity to get the top results and times when the second and final banked slalom races of the Landgraaf World Cup are held on November 14.