One rider and her dog – Sydney Collier and Journey’s story 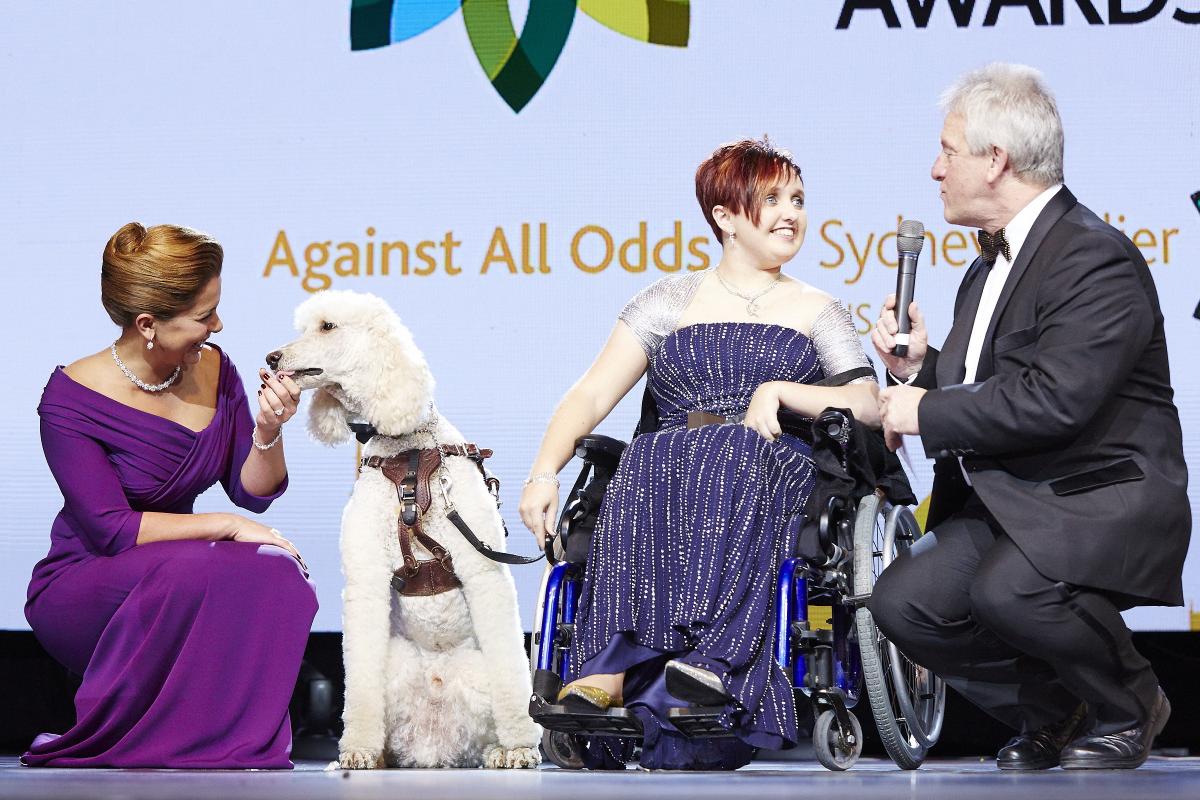 Sydney Collier and her service dog Journey receive the 2014 FEI Against All Odds award.

“He can turn lights on and off using a little push plate, pick things up that I drop, help me walk, find my mom if I fall. I even send him with a note to my mom if I need her (we call that old fashioned texting). He doesn’t cook yet though, but he certainly eats.”

At the Alltech FEI World Equestrian Games™ 2014 in France last summer, one of the undisputed stars of the para-equestrian dressage competition was a four legged creature named Journey. Journey was not however one of the many top flight horses competing in the competition. He was, in fact, a white standard poodle, the service dog of US rider Sydney Collier, herself the youngest competitor at the Games.

Both Collier and Journey were recognised for their contribution to the sport when Collier picked up the 2014 International Equestrian Federation’s (FEI) Against All Odds award at its annual convention, held in Baku, Azerbaijan.

Collier was born in Ann Arbor, Michigan and diagnosed with the rare Wyburn Mason syndrome at the age of seven. Now 17, she has undergone a series of operations, including three brain surgeries, is blind in one eye, and a stroke at the age of 11 led to paralysis on her left side.

None of that, however, stops her from being an accomplished and competitive rider – she was recently named 2014’s Junior Equestrian of the Year by the US Equestrian Federation – or from infecting anyone she meets with her enthusiasm, optimism and positivity.

She said: “I started riding at seven in eventing but was diagnosed at the same time. Thankfully I had riding and it was my escape from all that. When I had a stroke during brain surgery I woke up a totally different person, but all I knew was that I wanted to get back to walking as soon as I could so I could take care of my horse.”

But you cannot talk about Collier without talking about Journey, her service dog and constant companion. At the Games, Journey was given his own accreditation, while at the 2014 FEI Awards in Baku, Azerbaijan, he took to the stage in a natty black bow tie, to be presented with a special red FEI dog bowl by outgoing FEI President HRH Princess Haya.

Collier added: “I got him two years ago by applying to a wide variety of service dog organisations all over the US. We trained all summer with him and we really just clicked. From the first moment it was like we were automatically best friends.

“He can turn lights on and off using a little push plate, pick things up that I drop, help me walk, find my mom if I fall. I even send him with a note to my mom if I need her (we call that old fashioned texting). He doesn’t cook yet though, but he certainly eats.”

Wherever she goes with Journey, Collier is always the centre of attention, an opportunity she uses to promote the work of service dogs. Even at Baku Heydar Aliyev international airport, she attracted a crowd of onlookers from the airport community, including a porter who thought the dog was, in fact, a sheep. “I’m so honoured,” she said, “that people react to him so positively and he is opening so many doors for other service dogs.”

When she is not training with her trainer Wes Dunham and riding, Collier – who lives with her mother Anna in Millbrook, New York – volunteers at a special education school as a teachers aid and takes time to speak, motivate and encourage young people of her age who do not have the same motivation and family support that she does.

The rest of the Collier family (Dad and two younger brothers) live back in Ann Arbor and they manage to get together every couple of months or so. “My family is amazing,” says Collier. “My brothers tell me regularly that they love me, but they’ll love me even more if I win a gold medal one day.”