Para-sport explained: What happens during a doping control test?

For many elite athletes, taking a doping control test is a given. But most of the time, the timing is not the best. 20 Jun 2015

“You train so much, and you do it in an honest way, so you want that every other athlete is doing it in the same way. You want sport to be clean."

She had to take a drug test.

Whilst her teammates celebrated Paralympic gold, Zeyen had a doping control officer (DCO) watch her every move until she was able to provide a urine sample.

“There is nothing nice about doing a doping test,” Zeyen said. “But you know what you are doing it for.”

Doping control tests are conducted at all major International Paralympic Committee (IPC) events, and can be conducted both in competition or out of competition.. Having played for the German national team since 2002, Zeyen, like most veteran high performance athletes, calls the process “routine.”

Here is a quick rundown on what happens during a doping control test:

1. Athlete notified by a DCO or chaperone that they have been selected to perform an anti-doping test.

2. Athlete asked to sign a form, confirming they understand their rights and responsibilities.

3. Athlete reports to the doping control station as soon as possible.

4. Athlete chooses a collection vessel from a selection provided.

5. A minimum of 90ml of urine must be provided. Athlete disrobes from knees to navel to provide an unobstructed view of the passing of the sample. The DCO or chaperone of the same gender observes the urine leaving the body.

6. Athlete chooses a sample collection kit from the selection provided, and splits the sample into two bottles – marked A and B – before sealing both bottles.

7. The DCO measures the specific gravity of the sample to ensure it is not too diluted to analyse. If it is too diluted, the athlete may be required to provide additional samples.

• noting any substances being taken in the last seven days (e.g. prescription medication, over the counter medication and supplements)

• noting concerns or comments, if any, about the doping control session

• confirming the information, recorded numbers and sample codes are correct

• signing and receiving a copy of the doping control form

9. Samples sent to a World Anti-Doping Agency (WADA) accredited laboratory in strict confidentiality and tracked to ensure their security.

Results are normally received four to six weeks after collection.

The process is the same when being tested out of competition.

Like most high performance athletes in any sport, Zeyen is among a group of athletes in the German National Paralympic Committee’s Registered Testing Pool (RTP), meaning she must provide her specific location each day for one hour and be available for testing.

She fills out her whereabouts four times a year and must update it if her schedule changes in any way at all. She can be tested on any given day and, as with in-competition tests, must provide 90ml of urine and follow the same process of a normal doping control test.

To help athletes update their schedule, WADA has developed a phone app for athletes to use. It is vitally important an athlete updates their schedule, as three missed out-of-competition tests can lead to a suspension.

A few months ago, a doping control officer arrived to Zeyen’s place of work, stayed in her office which she shares with two colleagues until she was ready to provide the samples.

Ultimately, she understands the reason.

“You train so much, and you do it in an honest way, so you want that every other athlete is doing it in the same way,” Zeyen said. “You want the sport to be clean.”

IPC anti-doping senior Manager Vanessa Webb said in the past four years that she has been in the IPC, there has not been one refusal from an international athlete to take a doping test.

“I think that shows that athletes understand the process and comply and understand it is a rule in sport,” Webb said. “So when you sign up to compete in sport, you sign off on the rules and that includes the anti-doping rules.”

“As much as it is a requirement to comply with doping control, we also want athletes to feel empowered to ask questions about what is happening,” Webb said. “It is an uncomfortable process for a lot of athletes, but I would hope that athletes feel comfortable enough to really ask questions to make sure that they understand what is going on. The ultimate goal is to protect the health and safety of the athletes and to have a level-playing field in Paralympic sport.”

For more information on anti-doping, please visit the Anti-Doping secion on the IPC website. 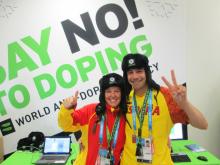