Paralympian Employment on the Increase

"This is an outstanding result and a testament to the strength and quality of the programme."

More Paralympic athletes than ever before are enjoying meaningful employment while also working towards their Paralympic dreams, thanks to the growing success of the Australian Paralympic Committee’s (APC) Paralympic Diversity Workplace Programme.

Twenty Paralympic athletes have now found employment through the programme, which was established in 2010, and as numbers continue to grow, the APC is confident it will carry on well into the next Games cycle.

“The programme is less than two years old and already 20 Australian Paralympic athletes have found employment as a direct result of this initiative,” said APC Chief Executive, Jason Hellwig.

“This is an outstanding result and a testament to the strength and quality of the programme.”

With the support of the Department of Families, Housing, Community Services and Indigenous Affairs and recruitment firm 360HR, the programme places athletes into employment that suits their experience, skills and goals and is also flexible with training and competition commitments.

It also aims to increase the number of people with disabilities in the Australian workforce while promoting diversity and inclusion.

Hellwig says the programme is another good example of the work the APC and its partners do for the community and people with a disability outside of preparing Paralympic athletes for major competitions.

“Many of our athletes are so focused on succeeding in their sporting careers that when they retire, they have little to no experience in the workforce in their chosen field,” he said.

“Many others also need to work during their sporting careers.

“We’re committed to the development of our athletes, not just as athletes but as people, and we want to help them have a clear career path once they retire and while they are training and competing.”

Athletes involved in the programme include eight-time Paralympic swimming gold medallist Matt Cowdrey who was successfully placed at the Department of Foreign Affairs and Trade as well as Paralympic wheelchair basketballer Kylie Gauci and athletics world champion Kelly Cartwright, who were both placed at the ABC. 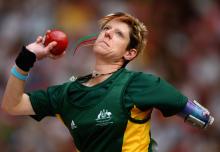