The T54 wheelchair racer was at Buckingham Palace in the British capital to launch the relay ahead of next year’s Commonwealth Games. 14 Mar 2017
Imagen 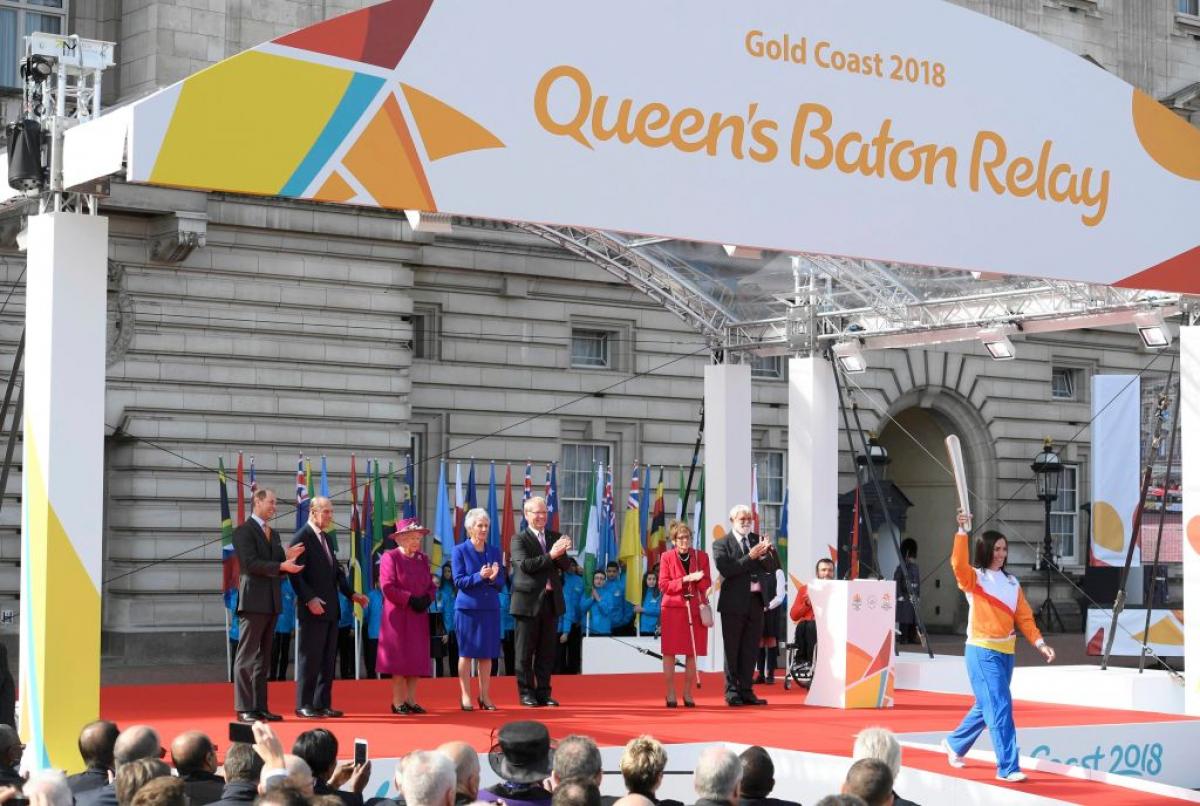 Retired cyclist Anna Mears from Australia carries the baton after receiving it from Queen Elizabeth during the launch of The Queen's Baton Relay for the XXI Commonwealth Games being held on the Gold Coast in 2018 at Buckingham Palace.

“This is a truly inclusive Relay and the Baton’s path through the Commonwealth will give children and people that can’t make it to the Gold Coast a chance to be involved in an unforgettable experience.”

Her Majesty Queen Elizabeth II set the Gold Coast 2018 Queen’s Baton Relay in motion during a star-studded commencement ceremony at Buckingham Palace on Monday (13 March) as part of Commonwealth Day celebrations in the British capital.

Accompanied by the Duke of Edinburgh and the Earl of Wessex, The Queen placed Her message to the Commonwealth and its athletes inside the distinctive Baton.

The Queen’s Baton will now travel through the entire Commonwealth for 388 days, covering 230,000 kilometres to its final destination, the Opening Ceremony of the Gold Coast 2018 Commonwealth Games (GC2018) on 4 April 2018.

Australian Paralympic champion Kurt Fearnley OAM delivered the Queen’s Baton starting from Marlborough House up The Mall and into the Palace Forecourt, accompanied by the eminent Band of the Scots Guards, who played by permission of Major General BJ Bathurst CBE, The Major General Commanding The Household Division.

Emily Dean, a nine-year-old middle distance runner from Southport, England, had the remarkable role of holding the message for Her Majesty before it was placed into the Baton. Emily was identified through the Adopt-a-Commonwealth Country program, part of GOLDOC’s international Schools Connect initiative.

For the first time at a commencement ceremony at Buckingham Palace, representatives of the Traditional Custodians of the land where the Commonwealth Games will be held, the Yugambeh Language Group People, delivered a moving invitation to all First Nations peoples of the Commonwealth to join in the celebrations of the Games on Yugambeh land.

Australian cycling legend and Commonwealth and Olympic Games gold medallist, Anna Meares OAM, was honoured with being the first person to receive the Baton from The Queen after Her message was placed safely within.

The recently retired champion and GC2018 Ambassador took the Queen’s Baton through the Palace Gates to longtime rival and arguably England’s most successful track cyclist Victoria Pendleton CBE, in a moment that was symbolic of Her Majesty’s long-held belief that friendly competition helps build lasting friendships and strong communities.

Together the star cyclists carried the Baton around the Queen Victoria Memorial, sharing the excitement with the public who were gathered to witness the start of the historic Relay.

The ceremony was capped off in classic Australian style when the Baton departed the Palace in the hands of world-renowned Gold Coast singer and environmental champion Cody Simpson aboard a Kombi van loaded with surfboards as a nod to the Baton’s final destination, Gold Coast, Australia.

The Queen’s Baton will take flight on 15 March to Sierra Leone, the first stop on the 288-day international journey to all nations and territories of the Commonwealth.

The Baton will arrive back in Australia and start its Australian journey on 25 December 2017. It will visit every state and territory across the country for 100 days.

GC2018 is currently calling on the Australian public to nominate people in their community to be batonbearers for the Baton’s home stretch.

GOLDOC Chairman Peter Beattie AC said: “Today’s ceremony was a moving start to what is going to be an inspiring journey. Our mission to share the dream of the Gold Coast 2018 Games with the world is now underway.

“This is a truly inclusive Relay and the Baton’s path through the Commonwealth will give children and people that can’t make it to the Gold Coast a chance to be involved in an unforgettable experience.

“By the time the Baton reaches Australia many thousands of people will already have been a part of its journey. And I urge all Australians to join in the festivities. Being a Batonbearer for the Queen’s Baton Relay is a unique opportunity to be involved in GC2018.”

Paralympic gold medallist and GC2018 Ambassador Kurt Fearnley OAM said: “It’s been an amazing experience to be involved with both the unveiling of the Baton’s design in Australia and now its global launch in London. I’m proud to be a part of a Relay that has been designed for the people and where there are no barriers to being a Batonbearer.

“Taking the Baton down the Mall was an unforgettable experience.”