Russia remains unbeaten after wins against China and Finland on day four of the Championships. 11 Feb 2015
Imagen 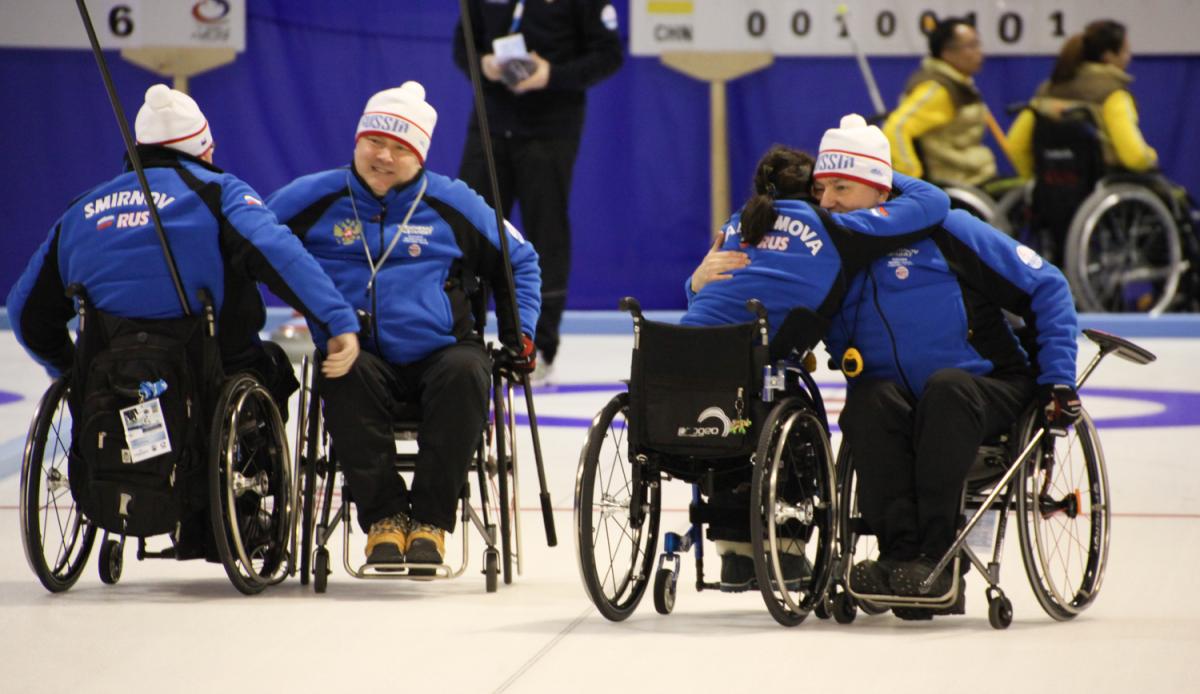 Russia are the first team to qualify for the play-off stages of World Wheelchair Curling Championships 2015 being played at the Kisakallio Sports Institute in Lohja, Finland.

Wins against China in the morning and Finland in the afternoon session secured their place in the play-offs, as they kept their unbeaten record intact.

In the morning session they played second placed China, and the team from the Pacific-Asia region proved tough opposition.

Only one point separated the teams throughout the game before Russia edged the win in the final end with a score of one point to take a 4-3 victory.

The USA and Finland needed an extra end to determine a winner, with the USA scoring four points from the last two ends to tie up the game.

In the extra end, USA skip Patrick McDonald was an inch too short with his final draw shot which meant Finland skip Markuu Karjalainen didn’t have to play his last stone as his team won 7-6, much to the joy of the on-looking Finnish spectators.

Canada and Scotland also met during session six, both desperate for a win to climb up the standings.

In this game, Scotland led 3-2 by the fourth end break as fourth player Gregor Ewan made a draw into the house for two points in the second end and then stole one point in the third end.

After the break Canada stole a single point in the fifth end before Scotland’s Gregor Ewan was light with his final draw in the sixth end to give up a single point steal.

Scotland then levelled the game in the seventh end, at 4-4, before Canada clinched victory with a score of two points in the eighth and final end.

Following their win, Canada skip Mark Ideson said: “It was a great game. We woke up this morning and regrouped after our tough loss yesterday afternoon when we were really close again - just on the wrong side of the dime. Scotland always play well and they always bring out the best in us. So it was a really well-played game on both sides.”

Slovakia picked up their second win of the Championships in the morning session, at the hands of Sweden.

Although the teams were level going into the final end, Slovakia guaranteed their win with a score of two points to claim their 6-4 victory.

Like Slovakia, Norway also picked up their second win of the week in session six, this time against Germany.

Norway took the lead in the third end, a lead which they did not lose as they stole single points in the next two ends before scoring another two points in the seventh end.

Germany conceded in the eighth end with the final score 6-2 to Norway. After this game, Norway skip Rune Lorentsen reflected on the week so far. He said: “We had faith in ourselves this morning. We’ve just been doing the same things we’ve been doing in practice and in the other games throughout the competition. I don’t know what happened in the games before but it seems like we’ve not been able to tackle the arena ice. In this game, most of the stones played as they should which helped us build our confidence.”

In the afternoon session of play, Russia picked up their seventh successive win, against hosts Finland.

Russia took the lead in the second end after a missed takeout by Finland skip Markku Karjalainen let Russia skip Andrey Smirnov draw into the house for two points.

Russia then scored six points from the next three ends, including a score of four points in the fifth end.

Finland eventually conceded after seven ends of play with the final score 9-3, securing Russia’s place in the play-offs.

Afterwards, Russia coach Anton Batugin said: “It was our minimum plan to qualify for the play-offs. We already knew that we would qualify before the game and that helped. Our experience was a big psychological advantage over the Finnish team today."

China maintained their position in second place with an 8-3 win against Germany, the highlight being a score of four points in the fourth end.

Canada also kept their play-off hopes alive as a series of steals, including three points in the fifth and seventh ends, forced Norway to concede to game after seven ends of play, giving Canada their fourth win of the week with the score 9-2.

Scotland and Slovakia went into their afternoon game both looking to escape the relegation battle, with the three bottom teams from this year’s Championship being relegated to the World Wheelchair Curling Qualification event.

It was the Eastern European team who took an early lead, with Slovakia up 4-0 after three ends.

This wasn’t enough however as Slovakia took single points from the last two ends to win 6-5.

The only other session seven game saw Sweden put a dent in USA’s play-off hopes, as they picked up their second win of the Championships.

They needed an extra end to do so however, which came down to a measure.

To their delight they, a Swedish stone was declared as the counting stone, taking the one point needed for their 7-6 win.

Standings after 7 sessions of play (W-L): 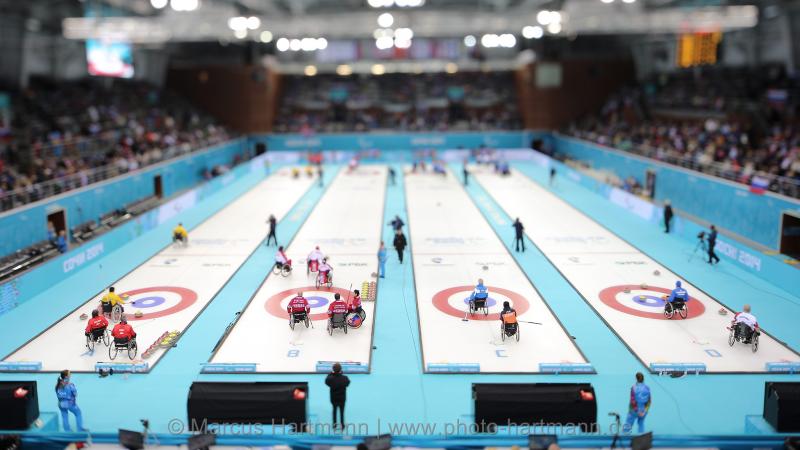 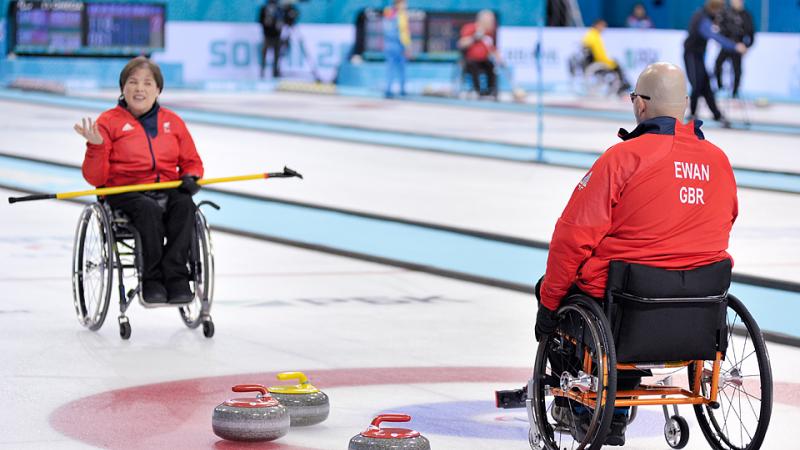 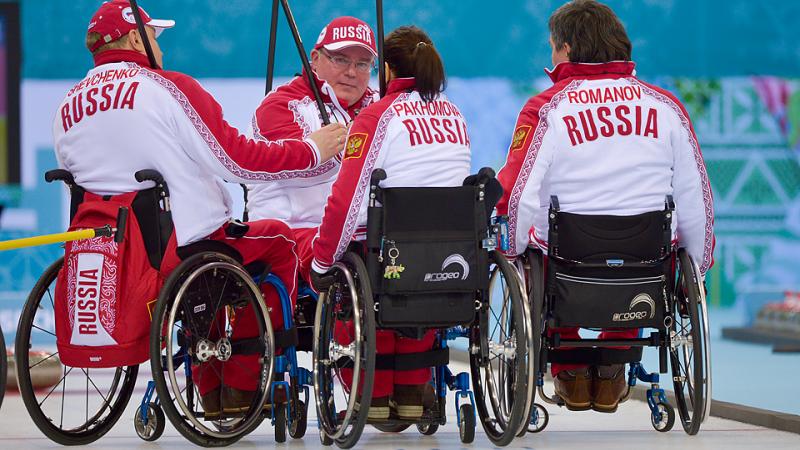