French President was keen to learn more about the impact and legacy a Paralympic Games can have. 21 Dec 2014
Imagen 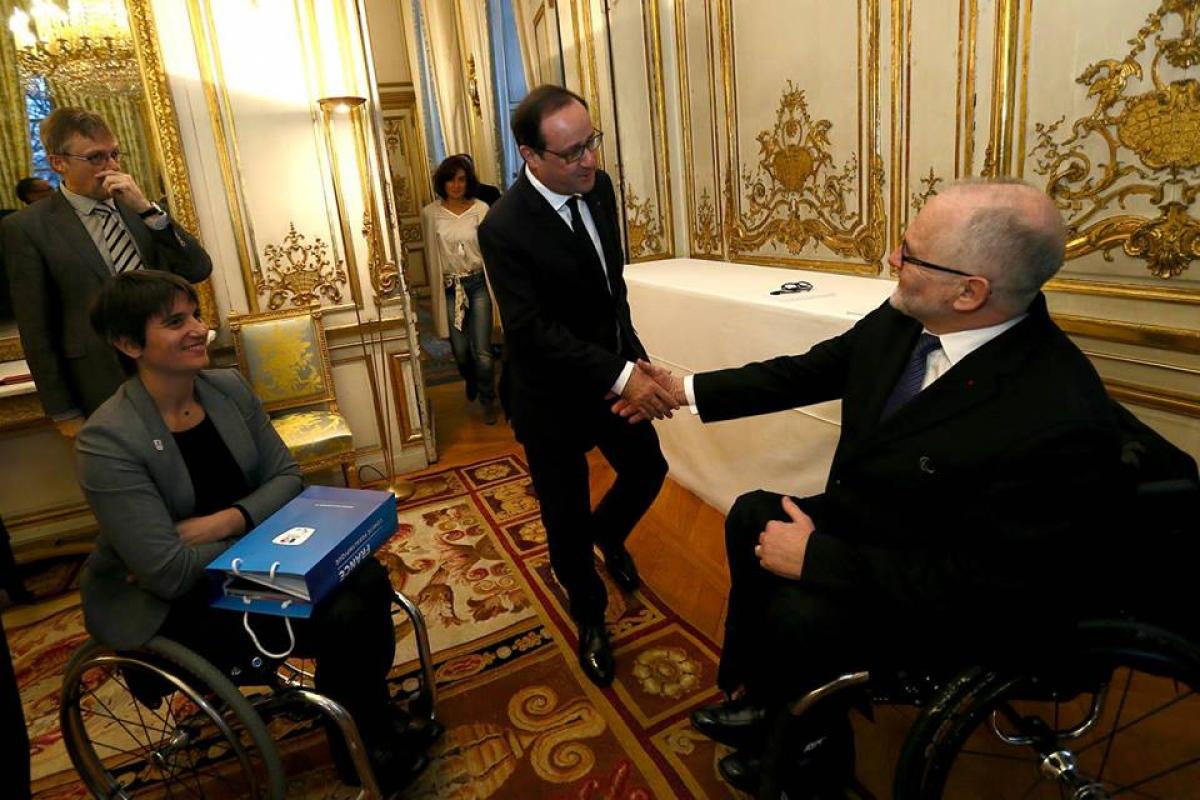 ⒸElysee
By IPC and NPC France

During a three-day visit to Paris, France, this week (17-19 December), Sir Philip Craven, the President of the International Paralympic Committee (IPC) met with French President Francois Hollande to discuss what impact and legacy hosting a Paralympic Games can have on a host city, region and country.

The 40 minute long meeting, which took place on Thursday (18 December) at the Élysée Palace, was organised by the French National Paralympic Committee.

Sir Philip Craven said: “It was a highly productive and exciting meeting with the French President and I would like to thank him for taking the time to meet me.

“He wanted to know more about the successes we have enjoyed with previous Paralympics and the lasting legacies they have left. He was also impressed at how a Paralympics can liberate people in many ways.”

On Thursday, Sir Philip also took part in a round table lunch discussion and debate with 50 representatives of French sport on the “issues facing the Paralympic Movement on an international and national level.”

During the session, Sir Philip spoke about the structure of Paralympic sport at international and national level and how athletes should always be at the heart of everything that is delivered.

“The IPC, international and national federations have a collective responsibility to ensure that para-athletes are looked after at all times and that development programmes are in place to grow sport at all levels,” said Sir Philip, who also showed those gathered a special video made to celebrate the IPC’s 25th anniversary.

The British born President also spoke about the Paralympic Movement’s ability to empower people and change perceptions of people with an impairment. He also reiterated the importance of the IPC’s growing collaboration with the IOC and how the IPC works with host Games cities to improve accessibility and leave a lasting legacy. Sir Philip also covered how the IPC works with bidding cities to ensure they fully understand the requirements for staging a Paralympic Games and what benefits hosting them can bring.

Sir Philip said: “I would like to thank the French National Paralympic Committee, in particular their President Emmanuelle Assmann, for a fruitful three days in the French capital.

“The visit was a great opportunity to raise the profile of the Paralympic Movement amongst a number of key stakeholders and meet some great people.”

On Thursday evening Sir Philip attended a cocktail reception organised by Patrick Kanner, the French Minister of the City, Youth and Sports.